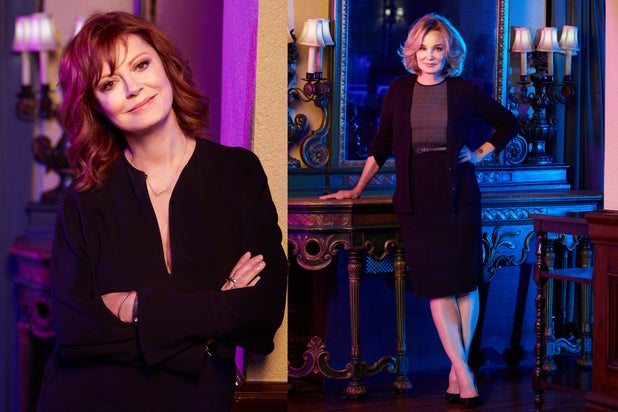 This story about “Feud: Bette and Joan” first appeared in the Miniseries/Movies issue of TheWrap Emmy magazine.

There’s a line that pops up several times in the limited run of “Feud: Bette and Joan,” and repetition does not make its sentiment any less true: “Feuds aren’t about hate, they’re about pain.”

After years of despising the other from afar, Crawford and Davis collaborated on the 1962 film “What Ever Happened to Baby Jane?,” a campy Robert Aldrich thriller that gave rise to what Feud calls the “hagsploitation” genre. It also set the stage for one of the most vicious moments in Oscar history, when Crawford was so furious that she wasn’t nominated for “Baby Jane” that she conspired to collect the Best Actress trophy on behalf of the star who would beat Davis, who was nominated. 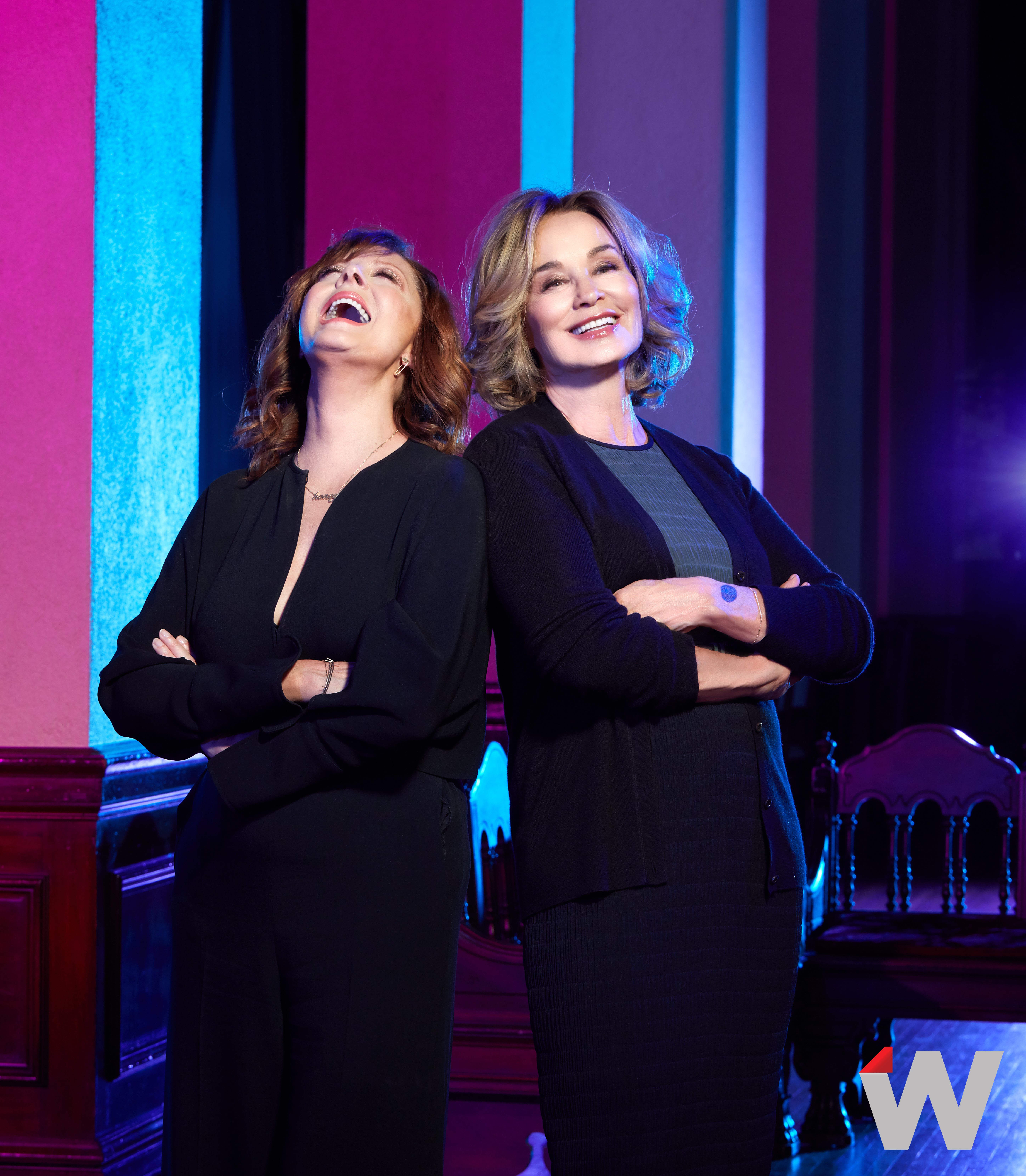 When Jessica Lange opened the curtains in her hotel on a late spring morning in Beverly Hills, she found a giant raven perched on her balcony. “We just sort of locked eyes and stared at each other,” Lange said later that morning. “Then he flew away with a lot of fanfare. It must be a sign.”

But what kind of sign? “I hope it’s good,” she said. “That wasn’t necessarily the case for Edgar Allan Poe.”

But Lange is not here to discuss the armchair suspense of Poe. There’s a different horror story on deck for her this TV season: the decline of old Hollywood star Joan Crawford, her long standoff with colleague Bette Davis and the cruel industry that exploited them both.

It wasn’t a surprise that Lange would once again join Ryan Murphy for an experimental series–their other FX franchise, “American Horror Story,” has brought her two of her three Emmys (and a Golden Globe). But after four seasons playing original and feverishly drawn Murphy characters, she turned to playing an historical figure, having earned her first Oscar nomination for Best Actress for 1982’s “Frances,” about the mental-health struggles of ’30s starlet Frances Farmer.

“I played Frances Farmer, but she certainly didn’t have the kind of profile that Crawford did,” Lange said. “And I played Big Edie Beale [HBO’s “Grey Gardens”] — everybody knows her every gesture, her every intonation. But that didn’t prepare me for what I learned about Joan. I came to really love her. Her sorrow, her sadness.” 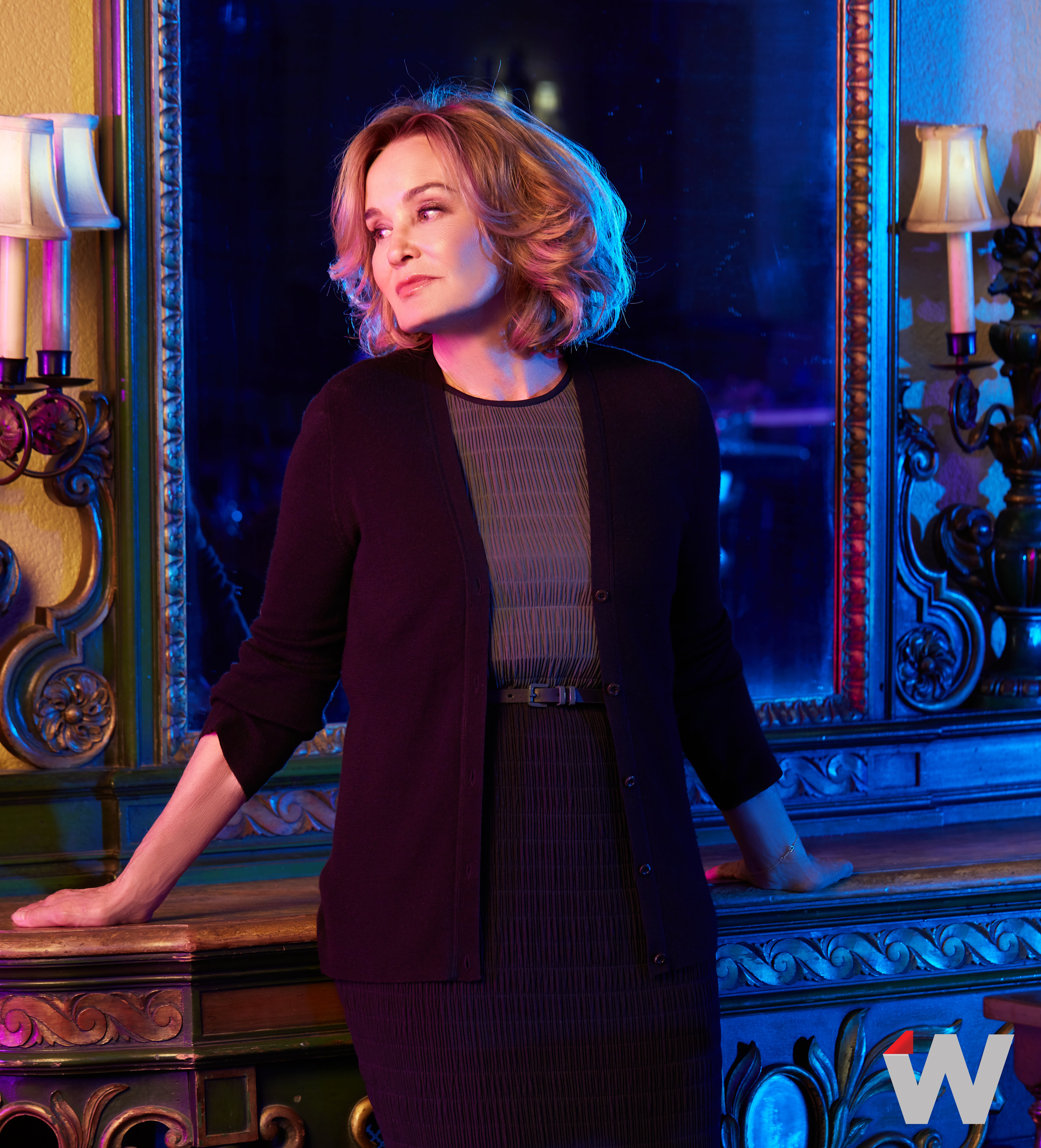 Lange began her preparation by watching Crawford’s films (“Grand Hotel,” “Mildred Pierce,” “The Women”), then pored over every recorded interview and even got her hands on home movies of Crawford and her family. But her job was not to build the Crawford of myth — it was to paint an institution in decline. “She was in her 50s, and Warner Bros. didn’t really have any use for her anymore,” Lange said. “There were no scripts around, so she went out and found ‘Whatever Happened to Baby Jane?'”

It was highly uncommon at the time for an actor — let alone a woman — to find source material to adapt themselves. “Baby Jane” wound up a commercial success, but a big critical flop.

“I think she actually believed she would be recognized and it would reignite her career,” said Lange. “That she’d be back where she was in the ’30s and ’40s. The way Hollywood is structured, that’s never going to happen for an actress in her 50s and 60s. Maybe not even in her 40s. It’s no different now.”

The way “Feud” tells it, “Baby Jane” was the start of a troubling trend of movies that degraded once-great stars for the audience’s entertainment — schadenfreude as a genre, you could say. The same audiences that worshiped Crawford as children could laugh at her cringeworthy turns in William Castle’s psycho-sexual ax-murder film “Strait-Jacket,” all the way to the bottom of the barrel with 1970’s sci-fi B movie “Trog.” Lange found parallels between Crawford and Davis and her own trajectory, as well as her peers who rose up at the same time she did.

“We were all getting great parts. Diane Keaton and Sissy Spacek and Sally Field, we were all working and doing great roles,” Lange said of her career from the mid-1970s into the 1990s. “But as time goes by, there are less and less roles for women of that age because there’s not the market. It was a bit of a perfect storm for my generation of actors. The industry changed, it became comic books and blockbusters. The demographic is supposedly no longer interested in women’s stories.”

The bottom line, she said: “We were aged out. It’s the same thing that happened with Crawford and Bette Davis. And I don’t see that it has changed that much. What has changed is that television opened up an avenue where you could still do really interesting work.”

The real culprit in “Feud,” she concluded, was show business — but other arenas also find a way to downgrade older women. “You’re able to watch Joan Crawford in ‘Strait-Jacket’ and ‘Trog,'” she said. “It was playing out in an incredibly public arena, which is humiliating. But I think women suffer that all the time. Not just actresses. In business, in the arts, in politics.” She paused. “Jesus, in politics.” 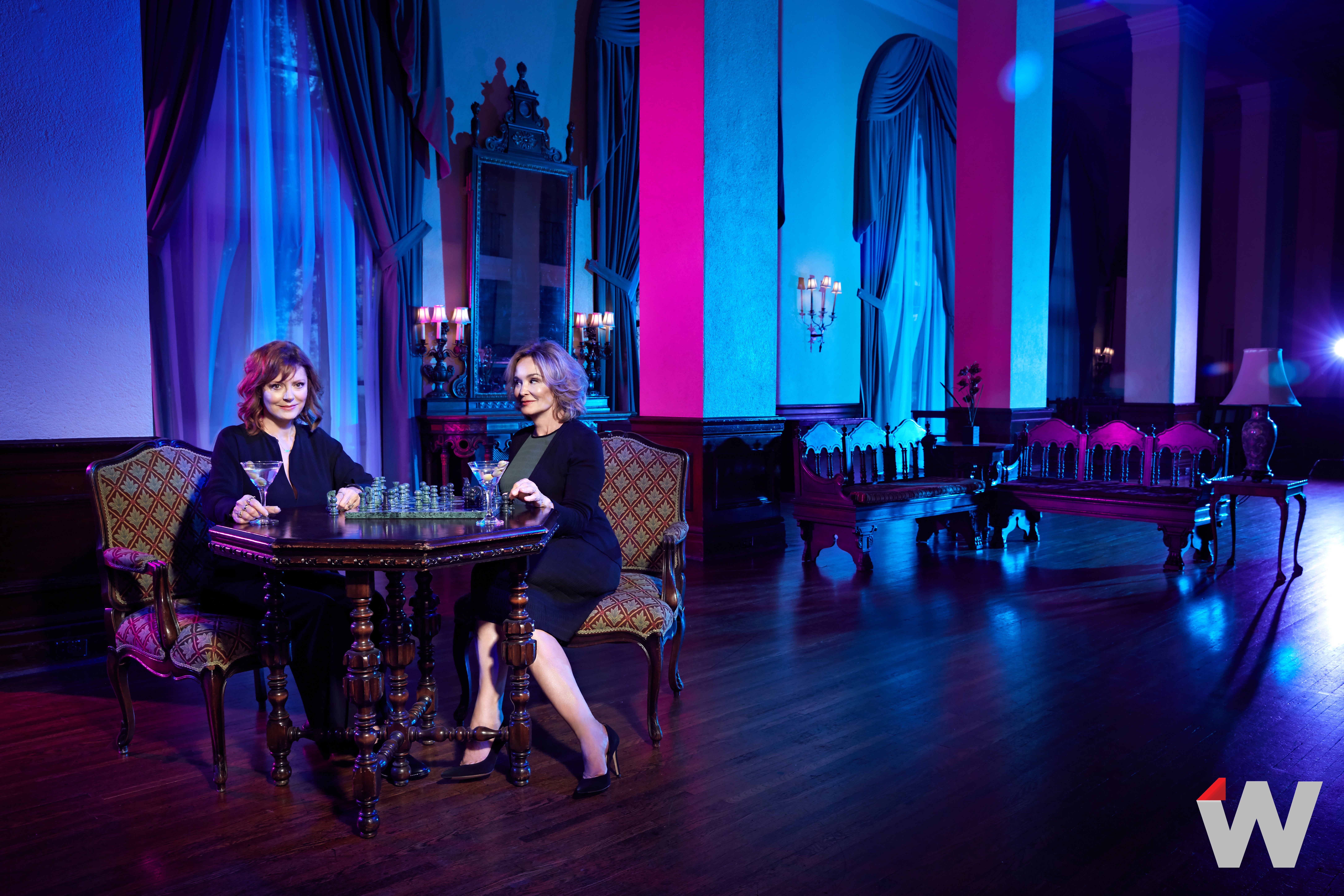 Susan Sarandon had a different relationship to Davis than Lange had to Crawford. Where her co-star went deep-diving into archives to learn about her star for the first time, Sarandon had come close to playing Davis several times in her life.

“I was asked by her when I was quite young to play her in a film, but it never happened,” Sarandon said. “Through the years there have been a number of scripts about other aspects and periods in her life. [There was one about the time] she went to the Hamptons to stay with folks during a film festival and didn’t leave for three months. There was also a stage script about Bette and Joan.”

But the story wasn’t “right” for Sarandon until now. “Feud” itself is an expanded version of a screenplay titled “Best Actress” that exclusively covered the fateful night in 1963 when Davis, Oscar-nominated for “Baby Jane,” lost to Anne Bancroft for “The Miracle Worker” and had to watch as a scheming Crawford accepted the trophy on Bancroft’s behalf. But that screenplay, she said, was “kind of a one-joke story: They’re bitchy to each other.”

Sarandon was enticed by Murphy’s idea of expanding the one script to eight episodes that fleshed out the story of Oscar night, though she needed Lange’s reassurance to sign on the dotted line. Completed scripts for the eight episodes had not been delivered when it was time for Sarandon to lock in her deal with FX, and Lange told her it was safe to take the leap with them.

Sarandon isn’t shy about the values she shares with Davis, including one that many audiences have found appealing in both: rebellion. “Stylistically, we’re very similar,” she said. “Not embracing being a star and all that goes with it. The glamour, the events, the courting of the community. She was an outsider, and I definitely identify with that.”

While she may not have played the “All About Eve” star before, Sarandon said she had turned to Davis for help in building her character for the 2009 Broadway production of Ionesco’s absurdist drama “Exit the King,” in which she played the wife of a king.
“I took out her Queen Elizabeth,” Sarandon said of the 1955 Davis film “The Virgin Queen,” “and I noticed she walked like a truck driver. That liberated me.” 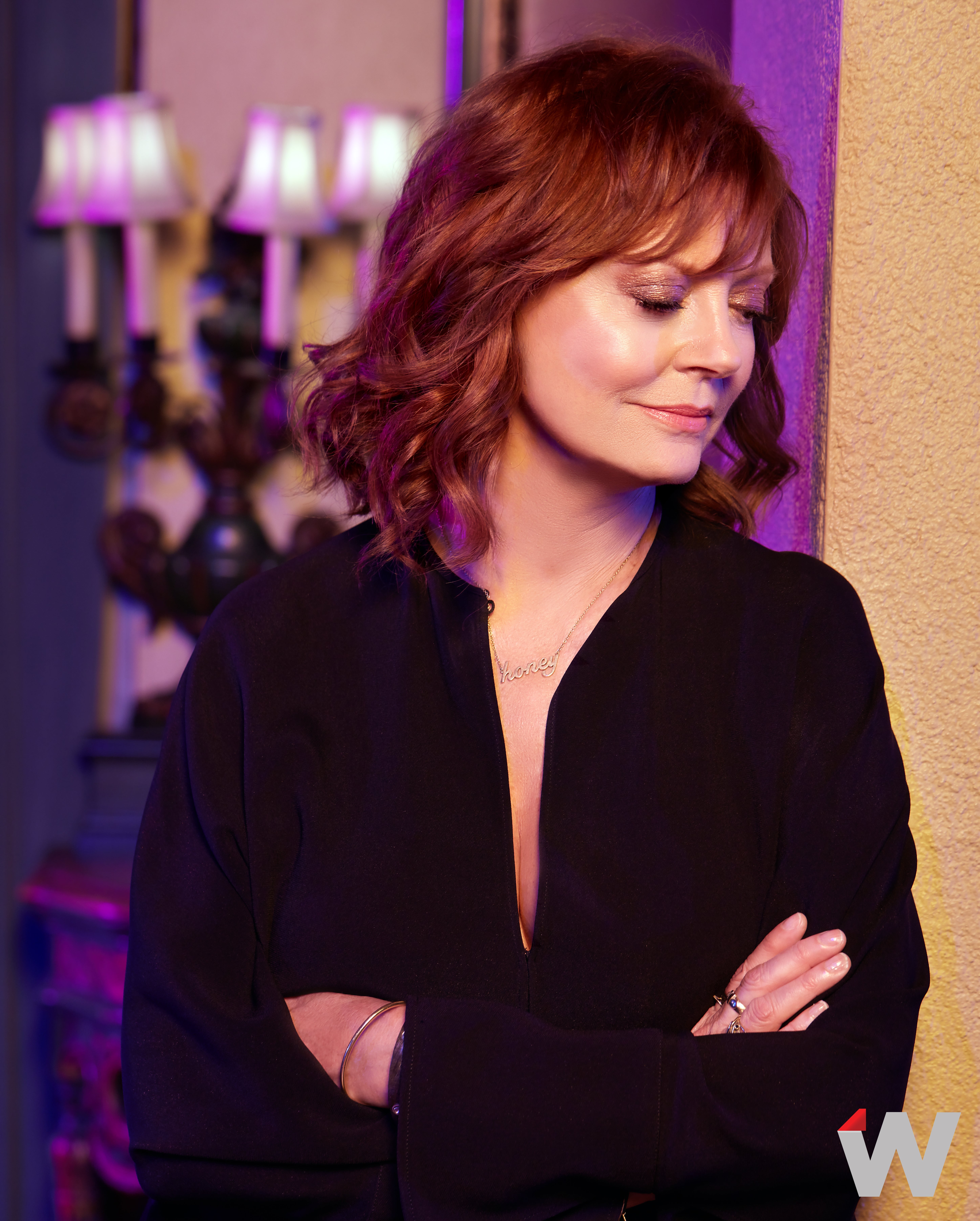 Sarandon’s Davis is as forceful and dramatic as one could fathom from the late actress’ many fiery performances and wry talk-show interviews. Her biggest concern was never making Davis “a meme,” she said, “because Bette was so idiosyncratic, especially with her voice.”

For the first half of the series, she’s reactive to Lange’s Crawford, who is grappling with the loss of her famous looks and the lack of substantive parts; Davis, on the other hand, seems to thrive by embracing her shtick and leaning on her considerable talent. But as time marches on, the Davis of “Feud” calcifies. She finds no forgiveness and delights in cruelty.

In the final episode, an AP reporter calls Davis to inform her that Crawford has died. “You should never say bad things about the dead, only good,” Davis says. “Joan Crawford is dead. Good.”

Sarandon admitted she “had a problem with that [scene]” given all she had learned about Davis. “I think it was true, but she also said a bunch of other things that were gentler.”

In one of the miniseries’ final moments, Olivia de Havilland (Catherine Zeta-Jones), Joan Blondell (Kathy Bates) and Victor Buono (Dominic Burgess) stand with Davis watching the In Memoriam reel in the green room at the 1978 Oscars. All eyes are peeled waiting to see the moment commemorating Crawford, who had passed the May before in New York. The actress flashes on screen for a moment, and then the next face pops up.

“Christ,” says Blondell. “Fifty years in show business and they give her two seconds?”

Davis looks to the monitor. “That’s all any of us will get.”

The actresses stop by StudioWrap for an interview and photo shoot