The cast: a mix of actors, reporters, execs and advertisers who enjoyed sushi, sandwiches, ice cream, and a little lunchtime boozing along with a peek at the next TV season. 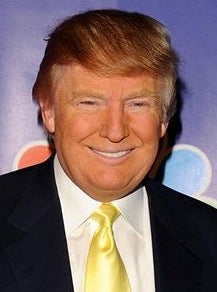 – "Apprentice" host Donald Trump stood at the rear of the ballroom. He asked an assistant to fetch him a list of the network’s new shows before heading off to the green room. On stage, stars and execs gave brief introductions in between clips of the network’s fall programming.

– "Late Night" host Jimmy Fallon (pictured below with J.J. Abrams) brought along an acoustic guitar to demonstrate the "live ads" advertisers can purchase on his show. He asked the crowd to shout out names of businesses so he could improvise some quick jingles.

"Applebee’s, Applebee’s, they now list their calories," he sang. Fallon’s pitch was clearly tongue-in-cheek. His next lyric was the line, "What part of I don’t give a f— do you not understand?" To say the least, it was a pretty strange sales strategy.

– Jimmy Smits, who’s starring in the new drama "Outlaw," the story of a Supreme Court justice who quits the court to spend his time exonerating wrongly accused prisoners, told how he prepared for the role. He said he read Jeff Toobin’s "The Nine" and "watched some great documentaries." 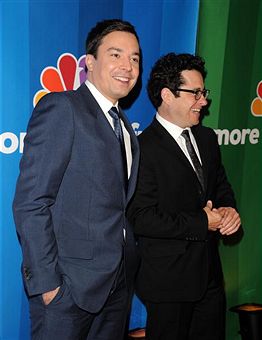 Smits also said, "I’ve met [Supreme Court Justice] Sonia Sotomayor a few times, but I couldn’t call her for advice on this one." Smits was cagey about which real-life judges may have inspired elements of his character. "He starts off a little bit to the right, so you pick one," he said.

– "Outlaw" isn’t NBC’s only new show with a politics-heavy plot. "The Event" stars Blair Underwood as the president in the midst of some type of nefarious CIA coverup. Underwood isn’t worried about a backlash against NBC’s inclusion of political themes in the fall schedule. 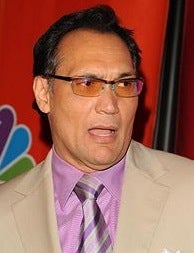 – "Community" stars Danny Pudi, Yvette Nicole Brown and Alison Brie approached NBC’s president and CEO Jeff Zucker to pay their respects and thank him for paying their checks. Zucker didn’t seem too concerned about the security lapses that allowed news of NBC’s new shows to leak on Twitter and in the pages of the Hollywood Reporter. "I wasn’t even here, I had no idea," he said.

– Jerry Seinfeld, Paul Reiser and Tina Fey talked shop. When he saw Fey, Seinfeld asked, "How do you feel being me?"

Both comedians have been in the unique position of simultaneously starring and writing on their own shows, but Fey didn’t necessarily agree with Seinfeld’s comparison. Afterwards, Fey told TheWrap, "I wish I felt more like Jerry … I think it’s probably good to be Jerry.”