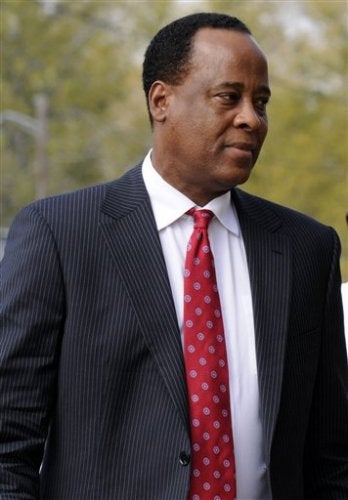 There are circuses, media circuses and Dr. Conrad Murray.

Murray, who somewhat resembles "The Simpsons" Dr. Hibbert character, is the late Michael Jackson’s personal physician who allegedly administered the powerful anesthetic Propofol to the singer last June, then took a nearly 50-minute break to call his girlfriend.

By the time he next checked in on Jackson, the King of Pop had stopped breathing. The rest is hysteria.

Celebrity gossip site TMZ has been beating the drum for Murray’s arraignment and a declension of the site’s headlines betrays a mounting wedding-day panic over the absence of Murray – and everyone else – at the altar of justice:

Conrad Murray Will Show in Court No Matter What (Feb. 5)

There has been speculation among off-the-record legal sources that in reality the D.A. was not quite ready to do anything with Murray this week, but that defense lawyers Ed Chernoff and Michael Flanagan, by very publicly offering to surrender their client, were trying to force prosecutors to show their hand.

If that’s the case, then TMZ and other sites may have served as speakerphones for the attorneys and their strategy. But then came reports that a disagreement between the D.A.’s office and the Los Angeles Police Dept. over the handling of Murray’s offer of self-surrender had led to the delays in his arraignment.

As has been reported by TheWrap, self-surrender is an option occasionally granted to suspects who wish to avoid the embarrassment of being handcuffed in public or in front of family members or work colleagues. According to stories making the rounds, the LAPD objected to Murray being able to skip the handcuffing part of his arrest and booking.

A carefully worded D.A. advisory issued a little before noon Friday declared that “[n]othing will be filed today in the Michael Jackson death case. A case will be filed on Monday, Feb. 8, at the Airport Court, 11701 S. La Cienega Blvd.”

No mention of Dr. Murray, much less of the involuntary manslaughter charge he is said to be facing.

With the D.A.’s terse demarche, the media Camp Conrad that had been assembling along La Cienega since Thursday had nothing to do but pack up. There followed, however, an opera bouffe created by Murray’s lawyers when they declared they’d hold a press conference on the courthouse steps. If nothing else, they would shake their fists against the dithering D.A.’s office.

After court authorities disabused them of this notion Team Murray, citing “safety concerns,” announced it would move the circus to something called Polliwog Park, miles away in Manhattan Beach.

There’s some political irony in this, as Manhattan Beach infamously banned African Americans from its strand early on in the 20th Century (Murray is, and Jackson was, of course, African American.) But it may have been more meteorological than historical issues that prompted Murray’s side to pull the plug on the bourgeoning fiasco as the rains came down and Ed Chernoff decamped for Houston.