Park City’s Main Street went from Hollywood shuffle to political uprising on Saturday, as the women of show business denounced the Trump administration on festival grounds.

Chelsea Handler, clad in a beanie branded with the Planned Parenthood logo, stopped frequently in emotion during her address to thousands huddled in a parking lot and Park City, Utah’s Swede Alley below.

“To the people who reject women’s rights, we reject your rejection,” Handler said standing beside friend and actress Mary McCormack.

“We’ve elected the only leader in the free world who denies the science of climate change,” said David, renowned environmental activist in town with the doc “An Inconvenient Sequel.”

“How strange, really? Because climate change isn’t a belief or philosophy up for debate or even denial. It’s science based on research started in 1958,” David continued. 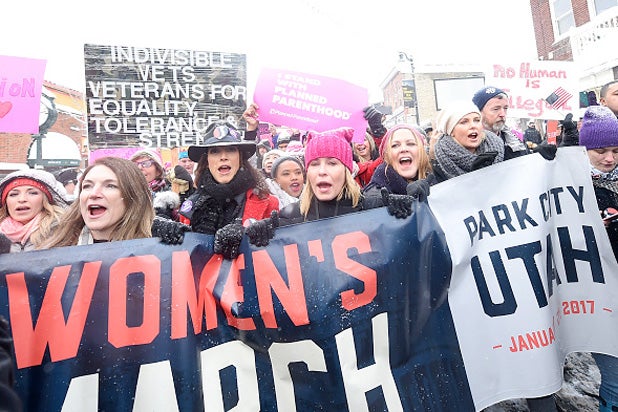 Bratt introduced Huerta, an activist and co-founder of the American Farmworkers Association. She’s also the subject of an eponymous doc making the Sundance rounds.

Huerta was received like a rock star, with people screaming from balconies and shop windows.

“We will not go back!” she said of womens rights, encouraging individuals to hold conversations in their hometowns about keeping progress alive.

“Only two things roused me from my depression,” Bello said of the election, “Meryl Streep’s speech at the Golden Globes and this March here at Sundance today.”

The march and rally had been in the works for weeks, and is considered a “sister march” to the massive event in Washington D.C.

“We, in the creative and Park City communities, stand in solidarity with the rest of our country in demonstrating our respect for freedom, human rights, our safety and health, and in recognizing that the diversity of our country is our greatest strength,” an official Facebook page for the event said.

“We open this march and event to everyone who respects human rights, civil liberties, and diversity. Despite its title, like the marches happening nationwide, this march is for women AND men,” the listing concluded.