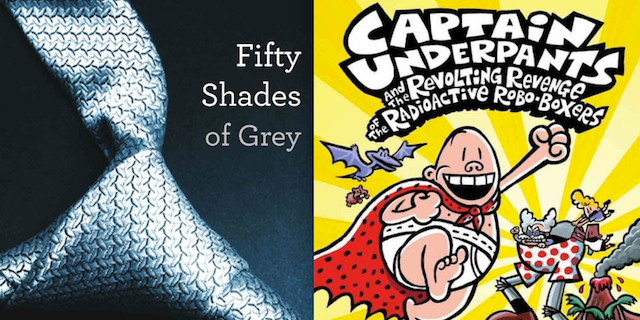 "Fifty Shades of Grey" may be full of kinky sex, but bondage couldn't overcome boogers to outrank "Captain Underpants" on the American Library Association's Top 10 List of Frequently Challenged Books in 2012.

The complete Top 10 List of Frequently Challenged Books in 2012, as compiled by the ALA Office for Intellectual Freedom:

The office compiles the list annually as part of the association's Banned Books Week, which celebrates the freedom to read and the importance of the First Amendment.

When Brevard County Public Libraries in Florida attempted to ban "Fifty Shades" in May 2012 because the book didn't meet "selection criteria," the ALA referred to its Intellectual Freedom Manual and the Library Bill of Rights.

“Librarians have a professional responsibility to be inclusive, not exclusive, in collection development and in the provision of interlibrary loan," the organization wrote in a piece explaining its Bill of Rights. "Access to all materials and resources legally obtainable should be assured to the user, and policies should not unjustly exclude materials and resources even if they are offensive to the librarian or the user. This includes materials and resources that reflect a diversity of political, economic, religious, social, minority, and sexual issues.”

So whether literary characters are bound by leather or underwear, Americans have a right to read about them.