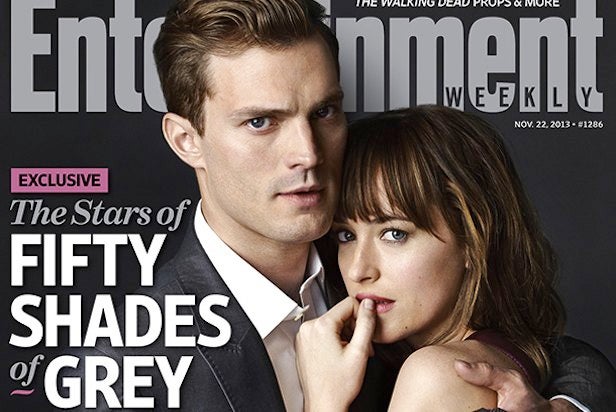 Jamie Dornan and Dakota Johnson are getting up, close and personal for the first time since being cast as S&M lovers Christian Grey and Anastasia Steele in “Fifty Shades of Grey.”

The actors cozy up on the this week’s cover of Entertainment Weekly to discuss what drew them to the breakout roles, the pressures they’re facing from the fans, and how they feel about baring their bodies on the big screen.

For Dornan — who audiences might recognize from Calvin Klein underwear modeling campaigns, as well as TV series “Once Upon a Time” and “The Fall” — taking off his clothes may be the easiest part of the job.

“I’m a fairly worldly guy,” Dornan says in the interview. “I grew up in a very liberal place. I’m not saying we had a playroom, but I’m not shocked by [the sex in the book]. It’s essential to tell the story. I can’t believe films that don’t invoke the sexual side of it. So it works for me.”

Johnson, who was cast months before Dornan, has been taking advantage of the time before production to prepare her body for the exhibition of a lifetime.

“Obviously, I want to look good naked,” Johnson said. “I totally understand now why people exercise, because it kind of f–king feels awesome.”

See the full cover featuring the two rising stars, below: