In her recent Jezebel piece “I’m So Damn Tired of Slave Movies,” Kara Brown notes, “I want stories about Solomon Northup and Nat Turner and Harriet Tubman to be told. But I also want to watch movies about black debutante balls and the Great Migration and a coming-of-age movie about a black teenager in Houston who loves to skateboard and gets into trouble with her Desi best friend.”

Missing from Brown’s wish list is a desire for a black Seltzer & Friedberg — the perpetrators of “Epic Movie” and the like — mainly because a) no one in their right mind wants that, and b) we’ve already got one, and his name is Marlon Wayans. And with “Fifty Shades of Black” he continues his pattern of creating movie simulacra — calling them “parodies” or even “spoofs” puts far too fine a point on it — whereby we’re supposed to laugh because we recognize the thing that is being reenacted, rather than at some comedic point that the reenactment is making or even at a funny or silly joke that has been draped upon the reenactment.

The first “Scary Movie” had its moments, which seems shocking in retrospect since Wayans, Seltzer and Friedberg are all credited co-writers. (Perhaps that movie represents the Skynet-attains-consciousness moment that some time-traveling film critic should attempt to destroy.) Since then, however, Wayans has subjected us to countless insults to our collective intelligence and sense of humor, including two “A Haunted House” entries and now “Fifty Shades,” a laboriously humorless jab at a movie that already seemed halfway to self-parody on its own.

Compared to other recent Wayans efforts, this one at least maintains a sense of focus, slogging through a scene-by-scene re-do of the original movie with only a few departures into other titles. (“Whiplash” and “Magic Mike,” if you must know.) But we still wind up with a slapdash movie that’s more unbearable than the heavy-breathing best-seller and its emotionally timid screen adaptation, even though the dreadful “Fifty Shades of Black” has the audacity to think it has earned the right to mock the slightly-less-dreadful “Fifty Shades of Grey” phenomenon. 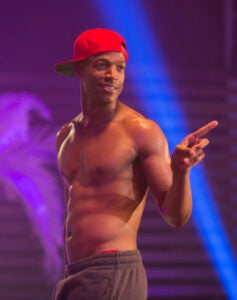 Hannah Steale (Kali Hawk, “Black Jesus”) interviews business magnate Christian Black (Wayans, who co-wrote with “Haunted House” co-conspirator Rick Alvarez), and … look, I’m not recapping the plot, which touches on just about every moment from “Fifty Shades of Grey” except for the glider. But here’s an example of the ha-ha jokes: Christian puts Hannah over his knee to spank her. He hurts his hand. She feels nothing. He hits her with a shovel. She puts on lipstick. He hits her with a stool, which shatters. She knits. Then she tells him she doesn’t feel anything down there since getting butt implants. Comedy!

As an actress, Hawk comes off as game and misused, and I felt genuinely bad for her for the film’s entire, nearly unendurable 92-minute running time. I also got very depressed watching Jane Seymour play an oblivious racist, Florence Henderson as a potty-mouthed nymphomaniac, and Fred Willard just being there at all. Jenny Zigrino, as Hannah’s oversexed roommate, is subjected to perhaps the film’s most egregiously embarrassing dialogue and costuming, with the central joke being that she’s awful because she’s zaftig and likes sex.

If anyone involved with “Fifty Shades of Black” should take pride in their work, it’s cinematographer David Ortkiese and production designer Ermanno Di Febo-Orsini, who recreate the look of “Grey” right down to specific shots and sets, as should Wayans’ personal trainer, who gave the actor a Jamie Dornan-comparable torso. Everyone else should bury this one deep in the back of the bookshelf, like so many rightfully chagrined E.L. James fans.