Skyler Grey is your average 13 year-old, except for the impressive fact that his unique street art hangs in galleries across the globe rather than under a magnet on his family’s refrigerator.

Grey’s work has been showcased at Graffik Gallery in London and Trace Gallery in Switzerland, and now the Baldwin Hills native is preparing to unveil his first solo show Sept. 19 at 7 p.m. at the Lab Art Gallery, which draws huge crowds despite being located on the corner of La Brea Ave. and 2nd St. rather than tony Melrose Ave.

Each of Grey’s creations sells for a minimum of $6,000. He’s been commissioned by The Game to reinterpret his controversial album cover for “Jesus Piece,” as well as create pieces for Diddy’s girlfriend Cassie and Ashlee Simpson, who wants one made for her young son Bronx. All are expected to attend the show along with Evan Ross, the son of Diana Ross.

Like thousands of teen boys, Grey looks up to NBA players like Kobe Bryant and Deron Williams, but athletes aren’t his real idols. Those would be Jean-Michel Basquiat, Pablo Picasso, Andy Warhol and Marcel Duchamp, all of whom Grey aspires to surpass in ability one day.

The teenager, who has never been formally trained, often uses pop culture characters such as Pac-Man and Wile E. Coyote to symbolize his own goals.

“They all represent the same thing; I’m chasing the greatest,” said Grey, whose show is called “The Fresh Prince of Street Art” as a nostalgic reference to a classic TV show. “I don’t know who’s the king but I know when it’s actually my time, I’m going to become the king,” Grey boasts one afternoon in August after one of his first days of school at Alta Loma High.

Grey started getting serious about art when he was 10. His mother died when he was just 2 years old as the result of a tragic hazing accident, drowning after her friends and teammates threw her into a pool while wearing handcuffs.

“Subsequently, they put him in therapy and part of the play therapy was art and drawing. I think in some ways that [tragedy] led to his creativity,” said his father, Holman Arthurs. “I would take him to art shows and in the car he would sketch what he just saw. I asked ‘how’d you do that?’ and he’d say ‘I just remembered what saw.'” 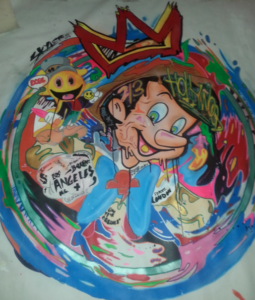 Skyler said he comes from an artistic family — his dad raps, his grandfather does collages, his mom and grandmother write plays and his uncle is an artist whose work has appeared in the Museum of Contemporary Art and the Museum of Neon Art.

“(My uncle) invited me to this one show for Kehinde Wiley,” Grey said. “He’s my favorite artist. He paints big, beautiful paintings of Brazilian people. I walked through the whole show and looked at his book and I finally told my dad, ‘I want to do this. I want to become an artist.'”

Skyler credits his father with the arc of his fledgling career: “We figured out that if you go to art openings you get to meet the artists. So I would bring my book and meet the artists and they’d tell me ‘I dig your drawings, they’re really good, you should blow this up and make it into street art.'”

One of those things was the tragic sudden death of singer Amy Winehouse, who is now the subject of one of Grey’s street art series.

“Queen Amy is my series. When I was just becoming a street artist, I saw that every street artist had one image. I had to come up with one and had a lot of different ideas. I watched a documentary of Andy Warhol and noticed how he made the image of Marilyn Monroe right when she died and it had a big impact, so I wanted to make mine right when Amy Winehouse died so it’d have a big impact,” he explained.

Grey estimates that he spends between 60-72 hours on a single piece, which he creates with acrylic and aerosol on canvas, “but with school starting, I have to do my homework, so I only get to paint at night and on weekends.”

Grey chalks his rising popularity up to “the magic of social media.” His first customer was a major street art collector from Switzerland named Hacky Cakmak.

“Literally, the first week [Skyler] did something, he got an email from Switzerland,” said Grey’s proud papa Arthurs. “After buying one piece he bought two more, and after buying those he bought three more. … He started telling people and that’s what got [Skyler] going.”

Arthurs says industry insiders often compare his son to Basquiat — though Basquiat wasn’t in the scene as a teen.

“This is like a secret society with curators and owners and artists,” Arthurs said. “Nobody wants to see a kid. But a lot of hard work, dedication, perseverance and just showing up to events with his game face on has led him to become one of the biggest up-and-coming artists in the United States.”

Some of his friends are eager to learn more about art, which Grey laments has become an expendable program in schools nationwide.

Speaking of school, that’s exactly where Grey sees himself in five years.

“I’ll be 18 in five years. I see myself at Yale in the art department. I see me still achieving my goals, and my goal is actually to finish college, so I see myself finishing college to bring my art to the next level. I want to learn how to do fine oil painting so I can mix it in with the stuff I’m doing now and come up with something really wild.”

Wearing a scarf and bacon-print socks, his hair was dyed bright red for his interview, during which he explained his logo of a cloud with a thunderbolt.

“It’s funny how I came up with it. Everyone called me Sky, so one day I drew a cloud with a little thunderbolt like Lightning McQueen had on his bumper in that movie ‘Cars.'”

Grey’s symbolic signature will be on display on Thursday night, as the first 100 people to show up at Lab Art will receive a free signed show print. Those wishing to attend can RSVP to info@labartgallery.com.

Grey is represented by attorney Ashwant Venkatram from PeopleTree Legal and Tony DeNiro from the Royal T’s Inc.