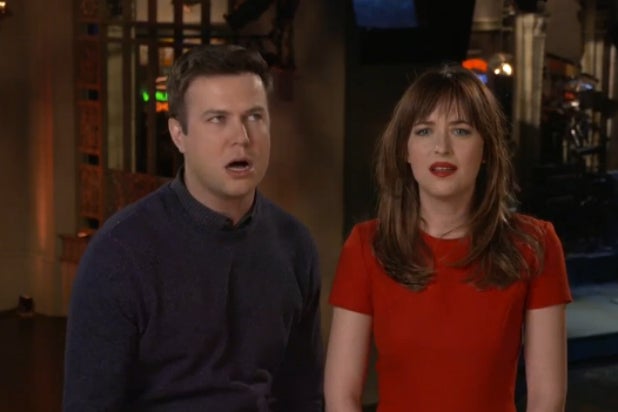 In the very first scene of the two-and-a-half minute video, “SNL” star Taran Killam asked the “Fifty Shades of Grey” star if her famous mother, Melanie Griffith, has gotten around to watching the Valentine’s Day movie since Sunday’s uncomfortable pre-awards show three-way interview with ABC’s Lara Spencer. She hasn’t.

“That’s so not fair,” Killam whined. “She’s not supporting you.”

“I know, Mom, please watch it,” Johnson groused back, before both moaned, “Mooo-ooom!”

Later, Killam nicknames the woman behind Anastasia Steele “Dakota ‘The Rock’ Johnson,” the two do a little dress-up role-play, and the actress describes her movie thusly: “I get my tushy spanked with a belt” — much to the comedian’s delight.

The duo spend the last minute of the extended NBC sketch comedy show commercial paying homage to this weekend’s host’s other parent, Don Johnson, with a “Miami Vice” posing game.