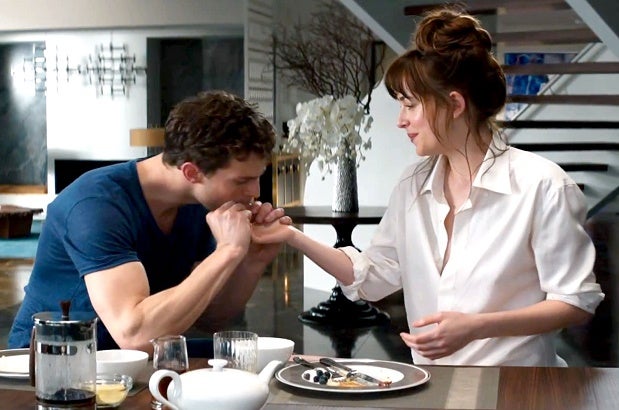 The sexy love story “Fifty Shades of Grey” held the top spot at the box office with $23.2 million this weekend, but never has a movie that made so much money in its first week made so little in its second.

The R-rated romance starring Jamie Dornan and Dakota Johnson was down a stunning 73 percent from its record-breaking $85.1 million opening last weekend. That’s the biggest plunge for a blockbuster since “Harry Potter and the Deathly Hallows Part 2” went from a $169 million opening to a $47.4 million second weekend in July 2011, a 72 percent drop, according to Box Office Mojo.

But Universal Pictures wasn’t shedding any tears on Sunday. “Fifty Shades” brought in another $68 million from overseas this weekend and that lifted its worldwide total to more than $41o million — an impressive return on a movie that cost $40 million to make.

“Kingsman: The Secret Service,” the Matthew Vaughn-directed spy spoof, finished second with $17.5 million in its second week. That beat out “The SpongeBob Squarepants Movie: Sponge Out of Water,” which soaked up $16 million in its third week.

The teen comedy “The DUFF” from CBS Films and Lionsgate and Disney’s inspirational high school cross country tale “McFarland, USA” opened a little better than expected. Both studios’ estimates were around $11 million, so Monday’s final numbers will determine who’s fourth.

The mediocre “C+” CinemaScore and weak reviews drawn by “Fifty Shades” had to have taken a toll. And the opening weekend grosses of the very female-skewing film got a boost from the Valentine’s Day date crowd. This weekend, the guys weren’t so willing to come along.

“‘Fifty Shades’ was a product of huge hype, great marketing and a killer release date. The type of interest it created fueled massive moviegoing from the moment it hit theaters,” said Paul Dergarabedian, Rentrak’s senior analyst.

“This wasn’t a movie that generated its box office revenues over time,” he said. “It was a sprinter that as expected drew its core constituency with an incredible immediacy and excitement, and that meant it was pre-destined to be front-loaded in terms of its trajectory.”

The $280 million that “Fifty Shades” has grossed overseas — better than “Sex and the City” and the first “Hunger Games”– provides plenty of solace.

“This happens with a lot of romance movies that build excitement with the audience who can’t wait to get out to the theater to see the film,” Dergarabedian said. “After that, the romance fades pretty quickly, but that’s OK since profitability — often the biggest turn-on of all for those in the Industry — is often assured within this relatively inexpensive to produce genre.”

Openers “The DUFF” and “McFarland, USA” benefited from exceptional audience receptions. The teen comedy received an “A-“ and the Kevin Costner sports film got an “A.”

That positive reaction was evidenced in its 41,000 mentions of “The DUFF” on the web site ListenFirst Saturday, part of CBS Films’ social media-heavy campaign for the film. It targeted mainly young girls and connected, with 75 percent of the audience female and 68 percent under 25 years of age.

“It starts with the movie, and we knew we had a terrific one here,” said David Spitz, executive vice-president of distribution at Lionsgate, which began its distribution deal with CBS with “The DUFF.” “The right date helped and then the reaction to the film really kicked it up for us,” he said. The profit will kick in soon, too, since its production budget was $8.5 million.

The PG-13-rated ensemble comedy was based on the novel written while author Kody Keplinger was in high school. Mae Whitman, Robbie Amell and Bella Thorne top the cast and Ari Sandel directed “The DUFF,” which was adapted by Josh A. Cagan. It was produced by McG, Mary Viola and Susan Cartsonis.

“McFarland, USA,” the true story of an over-achieving cross country team at a predominantly Mexican-American high school in California, drew a very broad audience. The crowd was evenly split in terms of gender and age, with 23 percent under 25 years old and 26 percent over 50.

The debut topped those of Costner’s last two movies, “Draft Day” and “Black or White.” Niki Caro directed and Mario Bello and Morgan Saylor co-star in “McFarland,” was produced for $17 million by Mark Ciardi and Gordon Gray.

“Hot Tub Time Machine 2,” directed by Steve Pink and starring Adam Clark and Scott Duke, couldn’t manage half the $14 million that the original film opened with in March 2010. That one became a stoner-fueled DVD hit, so Paramount and MGM can hope for that with the sequel, which had a $14 million production budget.