Holt McCallany currently stars in Netflix’s “Mindhunter,” but two decades ago, he was an up-and-coming actor who found himself sharing the screen with Brad Pitt in “Fight Club.” As the David Fincher film celebrates the 20th anniversary of its premiere at the Venice Film Festival, McCallany reflects on being part of the “iconic photo” from the set, calling it “one of the really memorable moments of my career.”

The photo of a bloodied Brad Pitt shirtless in a dingy basement, smoking a cigarette and ready to fight is arguably the most famous image from the film. Surrounding Pitt are other fight club members, including McCallany.

Fans can buy a framed photo that was signed by Pitt for $600.

“I love that photo,” McCallany told TheWrap. “It’s one of the really memorable moments of my career. There aren’t too many moments along the way that were more special than ‘Fight Club.'”

McCallany was a New York Broadway actor when he landed his role in “Fight Club,” the Edward Norton and Pitt-led action flick about two members of an underground group of brawlers. The still was taken by the set photographer Merrick Morton. McCallany said after the “Fight Club” premiere, strangers would approach him on the street, recognizing him due to the photo’s use during the film’s promotional run.

“I can’t even tell you the amount of people that came up to me and said ‘Bro, I saw that photo of you and Brad Pitt. Congratulations!'” McCallany recalled. “It was just like osmosis, they thought I must be a movie star, too.”

McCallany keeps a copy of the photo framed in his apartment in Manhattan as part of a wall of memorabilia in his acting career.

Morton’s first project working with Fincher was “Fight Club.” Fincher noticed Morton for his work shooting photos of L.A. street gangs, Morton said in an interview. He  said taking the shot of Pitt was a “challenge” because Fincher likes to shoot with minimal lighting, but praised Fincher for trusting his “eye as a photographer.”

And no, Pitt’s body isn’t the only reason the photo is so well-received.

Also Read: Brad Pitt Gets In a Firefight on a Moon Rover in 'Ad Astra' Trailer (Video)

“The composition is highlighting Brad, and you have all these other participants of this film surrounding him,” he said. “If it was just a single image of Brad only, it wouldn’t have had the same impact. It’s really who he’s surrounded by. That’s what makes the image stand out.”

Morton has been Fincher’s still photographer ever since “Fight Club,” including films including 2007’s “Zodiac” and 2012’s “Gone Girl.”

Check out the full photo below: 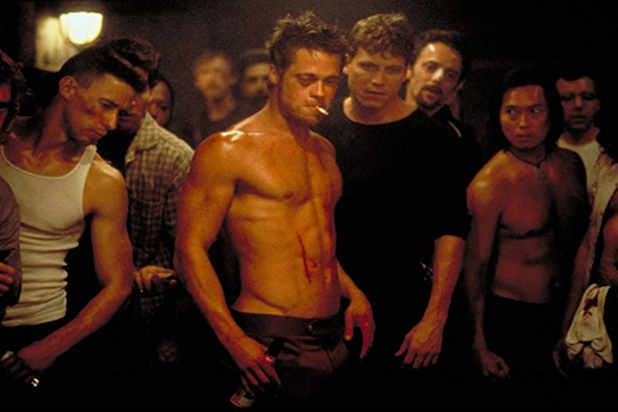