Film producer Jack Morrissey apologized Monday for joking about “MAGA kids” going “screaming, hats first into the woodchipper.” The tweet was accompanied by an iconic image from “Fargo” in which a dead person’s blood flies from a woodchipper.

“It was something that I did not give any thought to,” Morrissey told TheWrap. “It was just a fast, profoundly stupid tweet. … I would throw my phone into the ocean before doing that again.”

Morrissey, whose credits include “Beauty and the Beast” and films in the “Twilight” franchise, quickly deleted the tweet and apologized, but Sarah Palin and other critics slammed him on social media.

Passions ran high on social media Saturday after video emerged of several students from Covington, Kentucky, many of whom were wearing “Make America Great Again” hats, surrounding a Native American elder who was in Washington, D.C. for the Indigenous Peoples’ March. Many viewers believed the teens were attempting to taunt the elder, Nathan Phillips.

Morrissey said he deleted the tweet as soon after noticing negative reactions to it online. He then tweeted out an apology before locking up his entire feed from public view.

“Yesterday I tweeted an image based on FARGO that was meant to be satirical — as always — but I see now that it was in bad taste,” Morrisey wrote. “I offended many people — My sincerest apologies. I would never sincerely suggest violence against others,especailly kids. Lesson learned.”

Sarah Palin tweeted out a screen grab of his original tweet, along with the caption: “Don’t tell me this is THEE Jack Morrissey. ‘Famed’ Disney producer Morrissey? Dear Lord…”

“I have no issue whatsoever with taking responsibility, but also completely apologizing that I clearly intended it to be seen as satire, Morrissey said. “That was clearly not recorded that way by many who saw it.”

Asked whether he had changed his mind about the students’ behavior as more video emerged, Morrissey said he had not had time to research the situation deeply because he was too busy dealing with the fallout from his tweet.

“I have seen tweets from both sides feeling disappointed that the mainstream media went his way or that way. But I haven’t had the headspace to take the time to watch all the videos,” he said.

Disney, the studio behind “Beauty and the Beast” did not immediately respond to a request for comment Monday.

Last year, Disney fired “Guardians of the Galaxy” director James Gunn after a right-wing media personality and conspiracy theorist Mike Cernovich resurfaced a series of offensive tweets Gunn made about about pedophilia and molestation.

CNN reported Monday afternoon that Twitter suspended an account that posted a minute-long video showing the confrontation between the Native American elder and the Covington high school students, with the caption, “This MAGA loser gleefully bothering a Native American protester at the Indigenous Peoples March.”

The account claimed to belong to a California schoolteacher but its profile photo belonged to a blogger based in Brazil, CNN Business found. 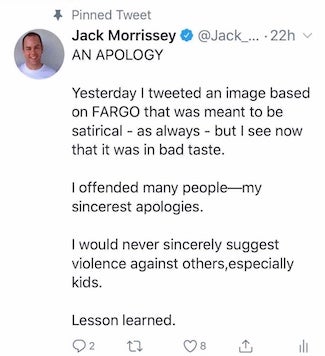