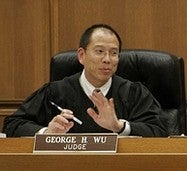 The sentencing of Gerald and Patricia Green for bribing a Thai government official, in exchange for lucrative Bangkok International Film Festival business contracts, was postponed Thursday. The next hearing date is March 11.

Room 10 of the Federal Courthouse had filled early this morning with the Greens’ supporters, who had possibly glimpsed an omen when three shackled prisoners were brought in for another case’s hearing, their chains clanking, Jacob Marley-style.

The two lead assistant U.S. attorneys looked confident as they prepared to present their sentencing recommendations for the Greens.

But that was before the hearing fell down the rabbit hole that is Judge George Wu’s court. Wu, who is known to be meticulous to the point of appearing obsessive-compulsive, had last year dragged out MySpace Mom case defendant Lori Drew’s sentencing on a handful of misdemeanors for six months, even though Drew ended up doing no time.

Thursday, Wu began the Greens’ hearing with the fateful words, “We’re here for sentencing although I’m not ready for sentencing.” Smiles immediately spread among the supporters who only moments before had appeared glum.

Turns out Wu wants from defense attorney Jerry Mooney an abbreviated medical history of Gerald Green, 78, who is emphysemic (he appeared in court with a small oxygen tank slung over his shoulder) and suffers from high cholesterol and an enlarged prostate.

Next, Wu requested some sort of official statement from the Thai government declaring Thailand had been harmed by the Greens’ activities. When AUSA Bruce Searby pointed out the government’s sentencing statement contained such a letter, Wu replied that he didn’t think that Exhibit A was necessarily an official statement – even though the request to Wu to punish the perpetrators by Commissioner Medhi Krongkaew appears on Thai government stationary.

Then Wu seemed to signal a belief that the Greens’ crimes (bribing a foreign official, conspiracy, money laundering and tax fraud) weren’t to be considered all that serious because, allegedly, Thailand may have profited from the Greens’ work on its film festival – and because the Greens had no apparent competitors for the film festival contracts, anyway.

“Normally,” said Wu, I hear from victims about how their lives were destroyed by the defendants. I haven’t heard that here.”

AUSA Jonathan Lopez, a Dept. of Justice prosecutor who had aided local DOJ attorneys in the case, was visibly perplexed.

“Don’t you like the give and take of argument?” Wu asked, smiling at Lopez. “Don’t you get this in Washington D.C.?”

All Lopez could say to Wu’s concern was, “It shouldn’t be that you can go out and bribe someone just as long as the host country profits from the bribe.”

For good measure, though, Wu also requested that the assembled lawyers research similar bribery trials and let him know what kind of sentences were involved in those cases. The judge set March 11 for the next hearing date. This case, it seems, is not over by a long shot.