A study released Wednesday by FilmL.A., the nonprofit organization that oversees location shoots in the Los Angeles area, reported a 4.7 year-to-year drop in on-location shoot days for the second quarter of 2017.

FilmL.A. attributes the production drop to the loss of several TV shows that filmed in L.A. last spring/early summer, mostly by cancellation. Some of the cancelled shows that films in Q2 2016 include MTV’s “Sweet/Vicious” and Amazon’s “Hand of God” and “Good Girls Revolt.” Another show that film in that quarter was Netflix’s revival of “Gilmore Girls,” which took the form of a four-episode miniseries. Because of the loss of those shows, shoot days for TV dramas dropped 24.3 percent to 789 shoot days.

“Declines in any category need to be put in context: the year-to-date comparison for thelast seven years shows 2017 is second only to 2016 for total Shoot Days,” said FilmL.A. President Paul Audley in a statement, also noting that 2016 was the best year on record for on-location production.

The rise in non-traditional platforms like digital media has also led to a steep drop in pilot yields, with pilot shooting days dropping 60 percent to 110 shoot days. FilmL.A. noted that lower pilot yields are being felt throughout the U.S., something that they would explore further in a forthcoming study.

See the statistics from FilmL.A. in the charts below 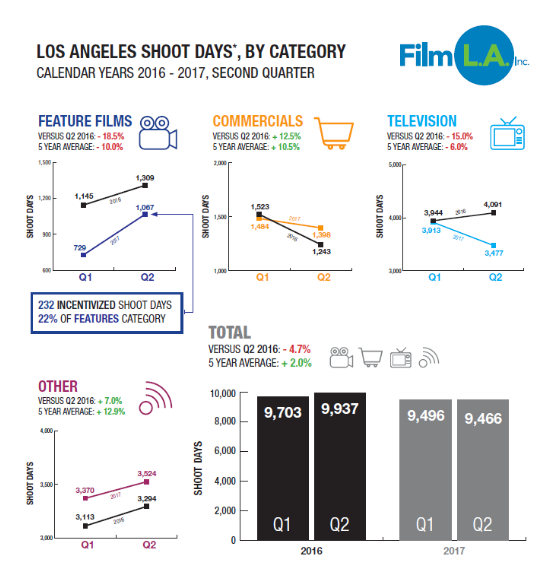 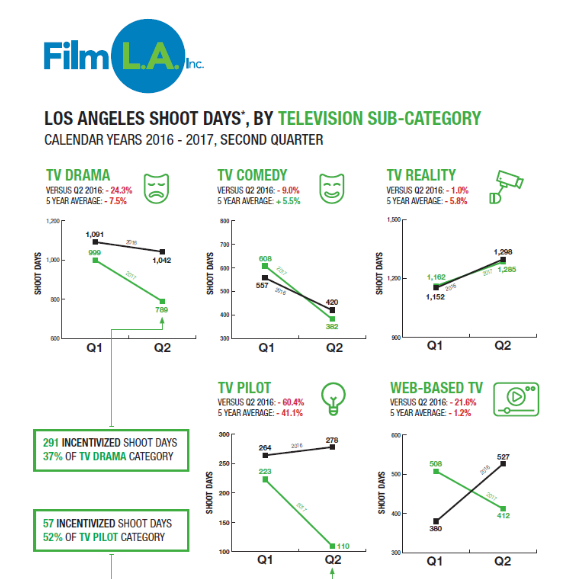 ”The Bachelorette“ doesn’t even sniff the Top 5 this year