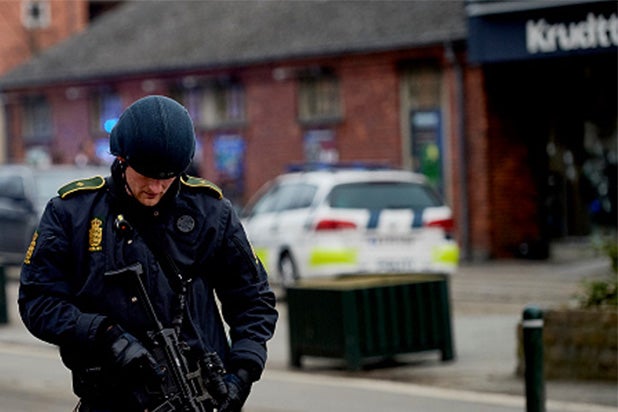 A documentary filmmaker was identified Sunday as the person killed at a free speech symposium in Copenhagen, Denmark, that featured an artist who has drawn cartoons of the Prophet Muhammad.

The victim was local director Finn Noergaard, 55, the Danish Film Institute told the Associated Press. Noergaard was gunned down while attending the Saturday afternoon gathering at a café about the Charlie Hebdo attacks in France and freedom of speech.

Noergaard directed and produced documentaries for Danish television, including the 2004 film “Boomerang Boy” which centered on an Australian boy’s dreams of becoming a boomerang champion.

Swedish cartoonist Lars Vilks, who has previously been targeted for death by Islamic extremists, may have been the intended target.

Vilks was unharmed in the attack and told CNN his bodyguards rushed him into a safe room until the danger had passed. Witnesses reported hearing up to 30 shots. Vilks said it appeared that police were surprised by the gunman’s firepower.

“The gunman, he had an advantage because his strong rifle could easily penetrate these glass doors while the policemen’s handguns didn’t work so well,” Vilks said.

A second shooting hours later outside the city’s main synagogue left a security guard dead and five police officers injured, authorities said. The 38-year-old security guard, identified as Dan Uzan, was standing watch outside a late-night bat mitzvah when he was killed, according to media reports.

Police wouldn’t say if the violent attacks were connected, but they didn’t rule it out.

As the search for those responsible intensified, police shot and killed a 22-year-old man early Sunday believed to have carried out the attacks.

The gunman was said to be a native of Denmark with a violent criminal record and gang ties.

Prime Minister Helle Thorning-Schmidt described the shootings as “a cynical act of terror against Denmark.”

After visiting the synagogue, Thorning-Schmidt said Denmark would do everything possible to protect its Jewish community.