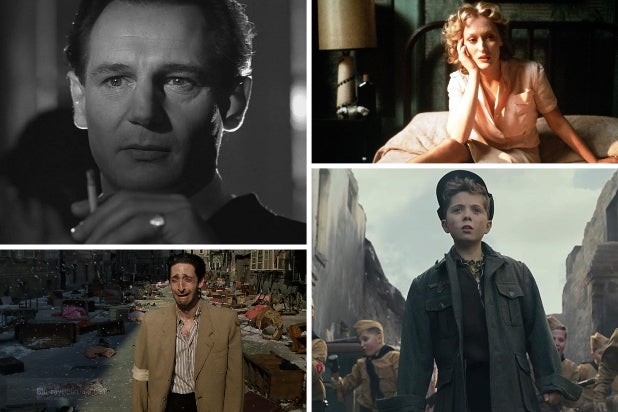 The words most associated with it are “never forget.” But with the Holocaust’s disappearance from too many curriculums — some 60% of young Americans are said to either not know what it was, or they think there were “only” 2 million murdered — forget forgetting. Let’s get back to remembering, on April 8, specifically, we have Holocaust Remembrance Day.

The timing merges with our country’s disturbing divisions. Some of the rioters storming the Capitol sported messages like “Camp Auschwitz” and “six million weren’t enough.” And then there’s that QAnon thing about Jewish space lasers. Museums (such as Steven Spielberg’s Shoah Foundation) and synagogues, of course, will be recalling those lost. The Shoah has now taken oral histories to a new level with its Dimensions in Testimony. Multiple cameras, 3D, and holograms allow visitors to press a button of choice and ask a survivor what daily life was like in a camp.

In the book world, the big new biographies of Mike Nichols and Tom Stoppard deal with their harrowing childhoods, escaping Nazism, and how that impacted their work and lives. The coming one about Philip Roth (who was often accused of being a “self-loathing Jew”) includes the line, “His decision, just 20 years after the Holocaust, to portray Jews in all their human variety — proved gravely offensive to many.”

Live theater may be on COVID hiatus, but the country’s numerous Jewish entities — while struggling to hang on — are streaming or presenting archival works. “Stories from the Violins of Hope,” as one example, is a beauty offered by the Braid in Los Angeles, and soon going national.

Movies-wise, the Oscar-nominee leader “Mank,” deals with a man whose religion played a big part in his life and career. Before becoming a journalist and screenwriter, he first worked as an editor for the American Jewish Chronicle, one of the earliest English-language Jewish publications. In 1935, when he was writing for MGM, Joseph Goebbels sent the studio a letter saying that none of the films Mankiewicz was involved in would be shown in Germany — unless his name was removed from the credits.

As we speak, Oscar Isaac and Ethan Hawke are heading to Budapest for “Moon Knight,” about the son of a Jewish rabbi who escaped from Germany on the eve of the rise of the Third Reich. While we wait, here is a list of ten films worth streaming and/or remembering — for various reasons — at this time.

This 2019 Oscar nominee may prove a good way to introduce kids to such a dark subject. It features a 10-year old German boy who is bullied — relatable already — and a single mom who has been hiding a Jewish girl in her attic. (No, not THAT hidden girl or THAT attic) Did we mention he has an imaginary friend who happens to be the fuhrer?

The satire of “Jojo” was not to everyone’s taste, and this 1999 film — which won Best Actor for Robert Benigni and Best Foreign Film — was also criticized for treating the subject with occasional humor. But it manages to remind us what any parent would do in such an unimaginably dangerous environment.

Meryl Streep won her first Best Actress Oscar for this 1982 adaptation of the novel by William Styron. The Alan Pakula film offers the worst-case scenario for a parent heading to a concentration camp. And it deals beautifully with the P.T.S. that survivors live with, appropriate in today’s world with so many veterans of the current conflicts.

Spielberg’s 1993 unique take on the Holocaust, via a relatively unknown Austrian businessman who risked his life to help those in the Warsaw Ghetto. It is a memorable story about selfless heroism, with great performances by Liam Neeson, Ben Kingsley and Ralph Fiennes. The Schindler Museum is worth a visit in Krakow.

“Memory of the Camps”

This 1985 doc comes from PBS’ “Frontline.” Original footage of three discovered and liberated camps is shown, filmed by several directors, including one Alfred Hitchcock. It is quite possible he never made a more notable horror film.

Talky and heavy-handed, but Stanley Kramer’s 1961 film serves as an important endpoint and lesson to the Holocaust. Spencer Tracy portrays the American judge sent over in 1947 to hear the cases of four Germans accused of crimes against humanity. Maximillian Schell won Best Actor. The film reminds us that when everyone knows something was wrong, the wrongdoers should be punished quickly. (Hint, hint U.S. Congress)

A Hungarian film from 2015 — which won the Oscar — is heartbreaking and frightening. The story deals with a Jewish concentration camp worker trying to give a young boy a proper burial. This is tough going, but a good choice for young people becoming familiar with arguably the worst atrocity in history.

Best Actor winner Adrien Brody stars as a Polish Jew whose talent on those keys may have saved his life. It is about the power of creativity as much as about politics. You know it’s a great film if the Academy had to swallow its pride and award director Roman Polanski too.

This documentary series is based on Mark Harris’ ingenious book about Hollywood’s top directors — Capra, Huston, Stevens, Ford and Wyler, who left careers to enter — and witness — World War II. The episode about George Stevens being among the first to view camp prisoners is remarkable. One is left unsurprised about the work those five produced upon their return.

It is a true challenge to introduce very young people to Holocaust stories but this highly touted children’s book — and subsequent animated short film — did so. Marc Bennett directed and Ed Asner narrates the 20-minute result, now available for streaming.