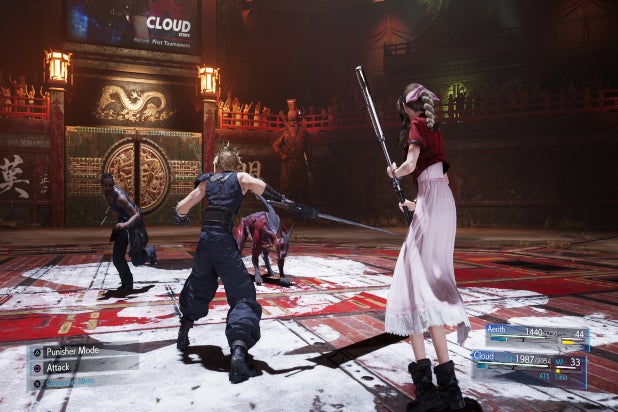 The hotly-anticipated remake of the 1997 original title is now the top-selling PS4 exclusive title in the last two years — it eclipsed Insomniac Games’ “Marvel’s Spider Man” game which Sony said totaled 3.3 million downloads in its first three days after its September 2018 release. The title sells for roughly $60, before taxes and fees.

In “Final Fantasy VII Remake,” the player is an ex-military, sword-wielding mercenary named Cloud Strife who’s slashing his way through a city controlled by a corrupt corporation (and his former employer), the Shinra Electric Power Company. Strife ends up leading a resistance group, called Avalanche, as they battle to take back control of the metropolis.

Actor Cody Christensen, known for his roles in shows “Teen Wolf” and “Pretty Little Liars,” was tapped to voice Cloud Strife in the remake. Christensen told TheWrap that the project was his first voiceover gig for a video game.

“I’m seeing through this fan base that’s so strong and dedicated, that there’s people who played ‘Final Fantasy’ the original game and now want their children to play the remake that’s coming out,” Christensen said. “Keeping that in mind, not only did we have to pay homage to the people that have fallen in love with this game, but we’re also trying to find new ways and bring in a whole new demographic to give a whole new life to ‘Final Fantasy’ in the future.”