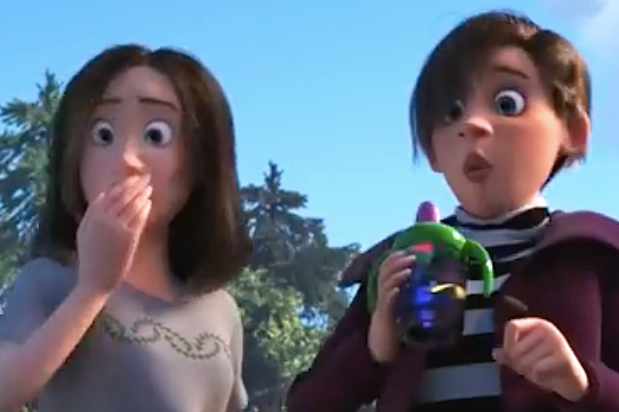 The new “Finding Dory” trailer is closing in on three million views on YouTube since being released last week, and fans can’t stop talking about the apparent lesbian couple spotted at the 1:07 mark.

Disney-Pixar has not yet responded to TheWrap’s request to confirm that the “Finding Nemo” sequel feature gay characters, but if true, it would mark the first time for Pixar to include a gay character in one of its films. And seeing as it’s a possible couple, that would be two gay characters making their debut.

The quick peek has a lot of people buzzing on social media. But given the uncertainty over the pair’s sexual orientation and how integral the human characters are to the “Dory” storyline, some LGBT supporters still aren’t satisfied.

“If audiences are perhaps jumping the gun in anticipation of this possible milestone, it’s because queer people are desperate and hungry for more than we’ve been given in the past,” Nico Lang writes in Salon, citing a recent GLAAD study that showed the number of queer characters in movies has flatlined.

“[It] would help the reputation of the studio, which has a tradition of shutting out LGBTQ character,” an Out Magazine article said, noting Disney’s failing grade in the GLAAD index.

The move appearance of what might be Pixar’s first lesbians seems almost perfectly timed, following social-media campaigns, like #GiveElsaAGirlfriend and #GiveCaptainAmericaABoyfriend, urging Disney to include LGBT characters in its future slate of films.

The potential gay couple in the new “Dory” trailer was first pointed out by a Disney fan on Twitter earlier in the week and gained steam from there.

That new #FindingDory trailer released this morning? I think that’s the first lesbian couple in a @DisneyPixar film. pic.twitter.com/S1wwJEOeWT

If you fancy giving your faith in humanity another slap, check the comments over there potentially being a lesbian couple in Finding Dory ????

Just read a post that said that a lesbian couple being in Finding Dory will lead to the suicide of our culture. Ok.

Its a little stupid how its a big deal that there is a lesbian couple in Finding Dory.

Finding Dory will feature a Lesbian couple and people are saying "Why does the film need lesbians?" I the a better question is why not?

People are actually mad bc their 'might' be a lesbian couple playing very minor roles in Finding Dory? K then.

that is great that there is a lesbian couple for 0.2 seconds in the new finding dory trailer but that should not be newsworthy at this point

There might be a lesbian couple in Finding Dory. Or they might be two women who live together and are just good friends and it’s the 1920s.

If this is true,the true Christians in Christ need to ban @findingdory – protect ur kids from the sins of this world https://t.co/p05b9WyiHR