“Fire at Sea,” Gianfranco Rosi’s film about Lampedusa, an island south of Sicily where African refugees arrive on their way to Europe, is both an enormously powerful piece of cinema and, in many ways, an anomaly.

It is Italy’s entry in the Oscar race for Best Foreign Language Film, but it’s also a documentary, the first its country has ever submitted to the foreign Oscar race.

“Fire at Sea” is the most dramatic film to open in recent weeks, but it also happens to be an even-handed cinéma vérité document that stays out of the way and films people from a distance.

It makes a strong political statement about one of the true tragedies of our era, but it does so without a single talking head or piece of inflammatory voiceover.

“Fire at Sea” (“Fuocommare”), which won the Golden Bear at the Berlin International Film Festival in February and opens in Los Angeles on Friday, is a true cinematic rarity, and an extraordinary and timely film in a time when anti-immigration fervor is at a worldwide peak.

TheWrap spoke to Rosi, whose other films include the acclaimed vérité documentaries “Sacro GRA” and “El Sicario, Room 164,” immediately after he arrived in Los Angeles this week to screen his film for awards voters.

Was this a subject you were passionate about before you started doing this movie?
I didn’t know anything. I didn’t even know where Lampedusa was, exactly. But in all my films, when I go there, I don’t like to be an expert. I like to go completely empty, and then immerse myself in the place, in the story, in the social, political aspect.

What I knew was that every time Lampedusa had been mentioned, it was always linked to a tragedy, to some kind of disaster, to fear of immigration. And I knew when I went there that I wanted switch the point of view. To not only talk about migration, but give an identity to the island. 4,000 people live on this island, which for 20 years has been accepting migrants arriving from Africa. I had to somehow gain the trust of the people and hear the stories, to see the story I wanted to tell.

How did you do that?
The first three months I was there, I didn’t have my camera with me, even. When I arrived, I saw that there was this tiny, tiny island with no interaction between the migrants and the people. It was two worlds that barely touch each other and never interact, which was very upsetting and very strange. And for the first three or four months, there were no migrants arriving whatsoever.

It was very difficult at the beginning to understand how to make this film, but in a way it was better because I was able to get in touch more with the population, with the people, and find a group of people I wanted to follow in my story and my film. And when I do start shooting, I work alone, as a one-man crew, so nobody really even notices me filming.

The most memorable of the people you follow is Samuele, a boy who roams the island with his slingshot.
He was the perfect storyteller, emotionally at least. It’s a coming-of-age film as this kid interfaces with life and grows into the unknown, as much as for us it is the unknown of this world that we don’t know how to relate to.

I fell in love immediately with Samuele. A little kid, very small, with a head of an old man. He’s almost the Woody Allen of Lampedusa. The lazy eye, the anxiety, the hunting, he lives on an island of fishermen but he’s not a fisherman, he would like to be a hunter … What I loved about him was always this sense of a link to the past. There was something beautiful and almost archaic. And also, his lazy eye can come to stand for all of our lazy eyes as we don’t look at the tragedy of migration. 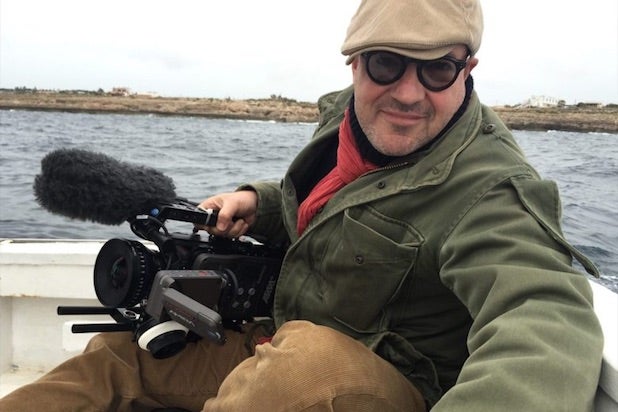 As you’re shooting more than a year of daily interactions, do you have an idea of how you’re going to structure the film? Or does that all come together in the editing room?
I have to have a sense of what I’m going to film, more or less. I have an idea, and from this idea I have to start building the thing. There’s the story of the islanders, the story of the migrants arriving on the island, the story of the rescue boats. Those three stories are interweaving constantly, and outside the frame is a fourth story, which is politics. Because my film is a political film, but there’s no political statement in my film.

You said that no migrants arrived during your first few months on the island. What was it like for you when they did arrive?
It was a very emotional experience. But at the beginning it was very difficult to decide what to film. In my work, I usually have to have a relationship, I have to know the person, I have to have knowledge who I’m filming. And my duty is to grab the reality, the inner world of that person. That was very difficult, because this wave of people arrive, and then they disappear and go somewhere else. It was very difficult to engage in a direct relationship, to go deeper.

That’s why I filmed at night, I filmed this mass of people. And then somehow I was able to grab an eye, to grab a moment with them, to see the fear as they faced a moment of death.

Death came even more dramatically when you were on the rescue boat, which found a boat where dozens of people had died crammed beneath the deck.
I spent more than 40 days in that rescue boat. We were only 11 miles from Libya when that happened. I will never forget. People are put in these boats that are overloaded. So the people in my film, they died because of the gas from the engine, and they were lying in that gas and in sea water. They died in, like, a gas chamber. It’s human slaughter.

We’re talking about 23,000, 25,000 people that we know died in the last 15 years making that trip. It’s one of the biggest tragedies that Europe is facing. More than 250,000 people are arriving from sub-Saharan Africa, from Syria, they are now stuck. They try to leave, and they can’t. The women are raped, there is a lot of organ trafficking. And it’s the duty of Europe to say, “What can we do for these people?”

Did you worry about putting so much death on screen?
I had to decide whether to put that in the film. But somehow, the whole thing was built to arrive at that moment, emotionally. That was the last thing I shot. After that I was not able to film any more, because I was completely devastated. To go under a boat, to smell death and to see people piled in this tangle of bodies, it changes you very deeply inside. But I knew it was my duty to show that.

You know, [philosopher Theodor] Adorno says that after the Holocaust, you don’t film death. But I feel that this is an ongoing tragedy, and I think we have the duty to show this tragedy. We cannot say anymore we didn’t know.

“Fire at Sea” doesn’t make an explicit political statement, but what statement would you make about the situation?
We cannot have these people face the sea like that after escaping death and escaping tragedy in their own countries. This is unacceptable. What would be wrong with a humanitarian bridge to take them straight from Libya, bring them to Europe? 250,000 is absolutely nothing. In Turkey there are three million people, in Jordan there is one and a half million people, in Lebanon there is one and a half million people. What is 250,000 spread across Europe? But Europe would have to open their borders. We cannot afford to have countries like Bulgaria, like Austria, like Poland, that say, “No, we don’t want them.”

Walls don’t resist history. Obama said something very strong and beautiful a few weeks ago. There was this migration crisis symposium at the United Nations, and he said, “When you build a wall, you build a prison for yourself.” That’s the concept that we somehow have to start understanding.

It’s a tragedy. Around the world there are 150 million people moving around. How can we build walls?