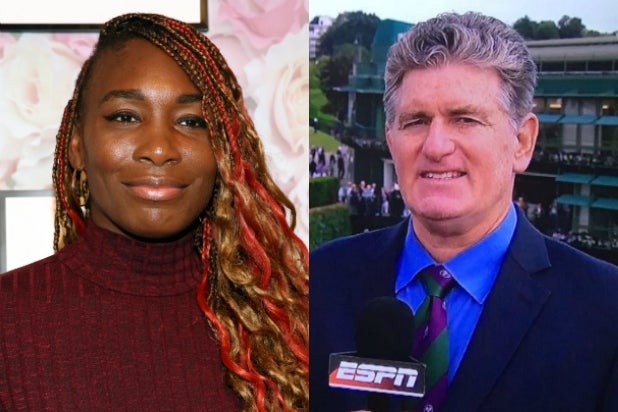 Doug Adler, the ESPN tennis analyst who was fired after referring to Venus Williams’ “guerrilla” style of playing at the Australian Open this year, is currently on the mend after suffering a massive heart attack — an attack that at least one of his doctors has attributed to his firing, and from the accusations of racism leveled at him.

When he does get back on his feet, Adler might have a tough time lining up a new gig, to hear his lawyer David Ring tell it.

“Radio silence,” is how Ring, who’s representing Adler in a lawsuit against ESPN, described Adler’s job prospects since his firing. “He is now a pariah. No one will touch him.”

TheWrap spoke to Ring about Adler’s health status since the Feb. 25 heart attack, the circumstances leading up to his firing, and what’s next in his case against ESPN. Read on for our conversation.

TheWrap: How is Doug doing after his heart attack?
David Ring: He had a massive heart attack. He just got discharged from the hospital yesterday, so he is in a quiet place now under doctor’s orders recuperating, and he has got a long road of recovery to go. It did serious damage to his heart.

Can you tell us anything about what the doctors said to him and how the current situation might have been contributed to his heart attack?
He never had prior heart issues, ever. He had never,, ever had a heart issue. So this came out of the blue, and I can tell you at least one of his doctors absolutely was of the opinion that this was directly caused by the stress of being terminated and the stress of being branded and labeled a racist.

Will the complaint be amended to take Doug’s heart attack into account?
It will for sure. It’s absolutely part of the case, so it absolutely will.

Can you tell me what Doug’s conversation with ESPN was like when he was terminated?
Basically, I want to say the next day after that match, ESPN came to him and showed him the clip and said, “Do you think there’s anything wrong with this?” and Doug said, “No.” ESPN then says that there’s been some Twitter or social media talk about it, and they’re getting heat for it. Next thing you, know, they say to Doug that they want him to apologize for what he said, and Doug said, “I didn’t say anything wrong.” They crafted an apology to basically say, “If anyone out there took it the wrong way, I’m sorry” — that kind of apology. And they told Doug, “Read it on the air and that’ll calm things down.” So he did, and thought everything would be fine, because he still believed he did nothing wrong — he didn’t do anything wrong. So he read it on the air and then the next thing you know he was asked  to leave the booth, because he read it during a match, and they terminated him. Right then and there.

It was their idea for him to apologize on the air. At first he was reluctant to do it, but he was assured that, “Hey, if you do it, it all goes away.” He didn’t apologize saying, “Oh, I called her a gorilla,” meaning an animal, he apologized saying “If anyone took this the wrong way, sorry, but this certainly wasn’t meant that way.” So he thought, “OK, fine, if they want me to do that, I’ll do that.” And he read it, thought he was going to be announcing that match. They asked him to leave the booth. He leaves the booth. Frankly, I can’t remember if it was that day, but certainly by the next day, they fired him.

Has Doug approached or been approached by other outlets about working for them?
Radio silence. He is now a pariah. No one will touch him. You’d think someone would stand up and do the right thing. For the French Open, he did not get the job that he’d been doing for many, many years. There’s only one reason why not, and we know why. We’ll see what happens with Wimbledon.