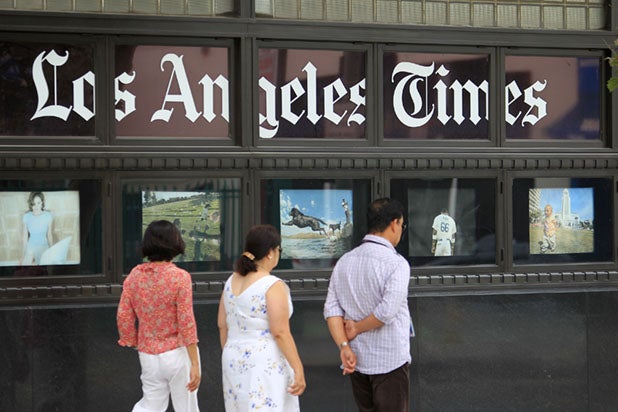 The Los Angeles Times was restive on Thursday after a bombshell NPR story on Wednesday reporting that former Times editor and publisher Davan Maharaj had secretly recorded Michael Ferro — then chairman of tronc, the paper’s parent company — calling L.A. billionaire Eli Broad a member of a “Jewish cabal” that controlled Los Angeles.

In addition, Maharaj’s attorney confirmed that he had reached a substantial financial settlement after he was fired earlier this year in a deal that NPR said was worth $2.5 million.

In response to the reports about its own operations, many employees on Thursday were quick to disparage Ferro, Maharaj and Tribune Publishing (as tronc is now known again after a short-lived, much-reviled rebranding).

“Obviously everyone was disgusted with the story — every part of it,” Matt Pearce, a national correspondent for the Times and officer of the L.A. Times Guild, told TheWrap on Thursday. “The story describes anti-Semitism by our old chairman, millions wasted on yet another executive instead of on our newsroom and a former editor who was allegedly willing to be paid off to keep newsworthy facts secret.”

Pearce added that his union would be demanding the right for writers to withhold bylines from stories in order to assuage any doubt in the public mind about their independence.

“Davan was widely disliked before this bit of news came out. People literally cheered when he was fired,” another Los Angeles Times employee told TheWrap, calling NPR reporter David Folkenflik’s work “impeccable.” “We all believe what he reported about Davan getting millions in hush money.”

The L.A. Times and Tribune Publishing declined to comment on the Maharaj settlement.

Maharaj did not immediately respond to a request for comment; his lawyer, Eric George, confirmed that Maharaj had reached a settlement but declined to discuss its amount or whether Maharaj had indeed recorded Ferro. “Any assertion that Davan received any payments to keep information secret is nonsense,” George said. “Tronc and Maharaj agreed on a confidential settlement that reflected almost 30 years of exceptional service to the Los Angeles Times.”

Patrick Soon-Shiong, who bought the L.A. Times in February 2018 for half a billion dollars, did weigh in about Ferro. “I was so very disappointed to read about the distasteful comments made about Eli Broad,” he said. “I am so glad that we were able to take over The Times and the San Diego Union-Tribune. This is behind us now, and we should move forward.”

A rep for Ferro has categorically denied NPR’s report, saying it contained “reckless allegations,” and insisting that Ferro is friendly with Eli Broad and “thinks the world” of him.

Ferro, who exited the company in March after a tumultuous tenure, made the remarks about Broad during a 2016 strategy dinner at an upscale restaurant near the company’s Chicago headquarters, according to NPR, citing two unnamed individuals who said they attended the event.

Maharaj clashed frequently with Ferro and was part of a string of high-profile editors to come and go during Ferro’s stormy two-year tenure atop tronc. Maharaj held the top publishing job at the Times for just five months before he was ousted and replaced by Ross Levinsohn.

Ferro’s leadership of Tribune Publishing was deeply divisive, with the executive overseeing waves of layoffs and cost-cutting across various properties as well as the renaming of the company to the widely ridiculed tronc.

He was ultimately forced to step down from the company in March of 2018 after accusations of sexual misconduct surfaced dating from his tenure at a Chicago investment firm. He still remains the largest single investor in Tribune Publishing, owning more than a quarter of its shares and is a close business associate of his successor on the job, Justin Dearborn.