Blumhouse Productions’ adaptation of the Stephen King novel “Firestarter” has gotten a release date and a first trailer. The film will hit theaters and Peacock on May 13.

Starring Zac Efron and Sydney Lemmon as parents Andy and Vicky, the story follows them on the run as they attempt to hide their daughter Charlie (Ryan Kiera Armstrong) from the government. Charlie has pyrokinetic abilities and, naturally, a sketchy agency wants to use her and her powers as a weapon.

Charlie’s powers tend to burst out in moments of anger or pain, but her father has taught her how to defuse it, at least temporarily. But as Charlie turns 11, her fire (literally, she can create flames) becomes harder and harder to control. 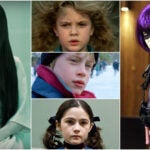 Also Read:
25 Killer Kids on Film – From ‘Firestarter’ and ‘The Omen’ to ‘Children of the Corn’ (Photos)

When Charlie accidentally gives up her family’s hiding place, a mysterious operative (Michael Greyeyes) is sent out to hunt down the family and take Charlie.

You can watch the first trailer for “Firestarter” in the video above.

King’s novel was first published in 1980 and the following year, the book was nominated as Best Novel for the British Fantasy Award, Locus Poll Award and Balrog Award. In 1984, it was adapted into a feature film starring a young Drew Barrymore. A mini-series follow-up, “Firestarter: Rekindled,” was released in 2002.