The 4th of July fireworks celebration planned in Ocean City, Maryland, hit a rather huge bump in the road early Sunday when the pyrotechnics went off while still aboard their transport truck.

According to the Ocean City Fire Department, officials were alerted of a vehicle fire at the beach, where the show was planned to take place. “Firefighters arrived to find that no vehicle was on fire; however, there was an unintentional discharge of fireworks that were being set up on the beach for the town’s fireworks show,” police said on Facebook.

Video of the moment was captured and posted to Twitter from various angles, but the clearest vantage point came from user Gilly Gene. 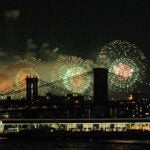 Also Read:
How to Watch and Stream 2021 ‘Macy’s 4th of July Fireworks Spectacular’ and More

Police said employees of the fireworks company suffered minor injuries but refused to be taken to a hospital. According to their Facebook statement, no beach or boardwalk patrons were injured because protocol mandates that before fireworks are off-loaded from transport, a secure safe zone around the area is created.

“It is this very zone and safety protocols that kept anyone else from being injured,” the statement said.

According to the fire department, the show planned for the 4th of July celebrations in the nearby downtown area was canceled following the incident.