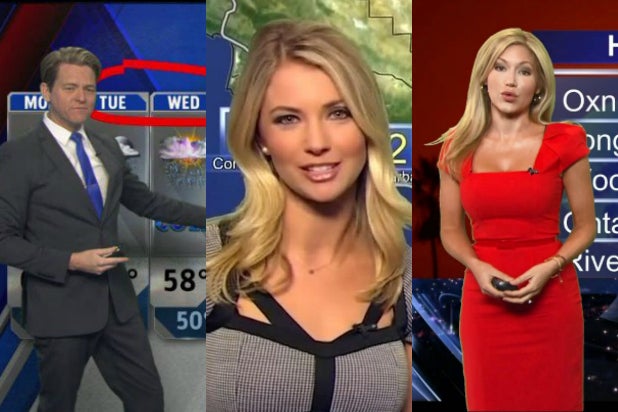 The television industry has always wrapped itself in the First Amendment to protect its right to entertain and report the news. But networks are also increasingly using the Constitution to argue that it can hire whomever they want.

When ABC’s “The Bachelor” wrapped its twenty-first season this week, it also wrapped a long, much-criticized practice of not letting an African-American star in the franchise: An African-American woman, Rachel Lindsay, will be front and center when the spin-off “The Bachelorette” airs in May. But that casting comes after a legal fight that is just one clash between the First Amendment and laws aimed at preventing race, age and gender discrimination in the workplace.

The latest lawsuit brought into question whether local newscasts have a right to hire attractive, young, female weather reporters instead of older weathermen. No, seriously.

Wherever you live, you may have noticed that your local weather reporter has become younger and better-looking, as ratings-hungry news shows have gone from one cliche — the wacky weatherman — to another: the youthful, pretty weather woman. (“It’s Always Sunny in Philadelphia” has made fun of this phenomenon with the character of model-beautiful weather woman Jacki Denardo.)

Hunter said he wanted to follow in the mold of now-retired KCBS weatherman Johnny Mountain, but was told by KCAL’s station manager that KCAL “catered to … male viewers” and Hunter “wouldn’t be the type [that] men would want to look at.”

CBS retorted that it had a First Amendment right to hire whomever it wanted, because the Constitution protects its right to choose the content of the news and how the news is delivered.  Besides, the network said, it was allowed to hire weather anchors who were “local celebrities” to boost ratings.

But Hunter’s case won’t decide the question of whether networks have a Constitutional right to hire weather reporters in the “blond, attractive, buxom mold” — because the California Court of Appeal dismissed Hunter’s discrimination case last year based on a separate argument from CBS.

Last year, the court agreed with the network’s contention that it employed other middle-aged male weather anchors, not just young women — leaving open the question of whether CBS would have had a legal right to hire only young, attractive women.

Also Read: Middlebury Professor Speaks Out About Mob That 'Gave Me a Concussion'

Outside of the news and entertainment industry, employers are rarely successful when they argue that they need to hire attractive young women to please their male customers.

Southwest Airlines, Pan American and other airlines were laughed out of court when they tried to make the argument in the 1970s and ’80s.  Southwest argued that it needed to hire only women as flight attendants and ticket agents and dress them in in high boots and hot pants to attract the airline’s predominately male Texan passengers. A Texas federal judge shot that argument down, saying that the primary functions of ticket agents and flight attendants are to book flights, sell tickets, maintain cabin safety, and serve food and drinks — and that all of those tasks could be done by men.

Congress gave employers permission to discriminate based on sex — but not on race — but only when gender is essential to the primary function of the job. Playboy was allowed to hire only female “Bunnies,” for example, because their dominant function is to sexually entice heterosexual male customers.  Hooters has been hit with class-action lawsuits for hiring only ” Hooters Girls” as servers, and settled by agreeing to hire men as bartenders and hosts, but has stuck to its all-women server policy. As the Hooters website says of its idealized “Hooters Girl”: “a waitress she is not.”

ABC is no Hooters. But its “Bachelor” case also forced it to defend its decisions about who to hire. And it won a resounding courtroom victory when it used the First Amendment to defend itself against a race discrimination lawsuit claiming it intentionally hired only white Bachelors and Bachelorettes. (Age and looks weren’t an issue in this case, given that everyone involved in the dating franchise is young and almost universally regarded as attractive.)

Nathaniel Claybrooks and Christopher Johnson, two African Americans, sued ABC after being rejected as applicants to be the “Bachelor” in 2011.  They said in their Nashville, Tennessee lawsuit that the “complete lack of people of color” in the two shows “is no accident.”

ABC responded by saying that the network shares the men’s “goals of reducing racial bias and prejudice and fostering diversity,” and that it never discriminated “based on race in connection with the casting process” for the “Bachelor” and “Bachelorette” shows.

A federal judge in Tennessee agreed with ABC, dismissing the lawsuit in 2012. The judge praised the lawsuit for its “laudable” goals, but ruled that the First Amendment prevented Claybrooks and Johnson from “forcing” ABC to deviate from its all-white casting.

Eventually, diversity won the day — as Lindsay’s casting as the next “Bachelorette” shows. But the ruling was based on ABC’s decision that she would be the best Bachelorette, not a judge’s order.

ABC has made a bigger commitment to diversity in recent years, as the country evolves and networks increasingly recognize the value of courting non-white viewers. Two of television’s biggest recent hits are ABC’s “Black-ish” and Fox’s “Empire,” both of which have majority African-American casts.

The bottom line? The legal forecast isn’t clear when it comes to who networks can hire. But the demographic patterns — and business decisions — point toward a greater commitment to on-air diversity.

Never in the history of television has your local weather person been so unlikely to be a weatherman — especially an older white man.

View In Gallery
BIO Susan Seager
Susan Seager is a Los Angeles First Amendment attorney, an adjunct professor teaching media law and intellectual property at the University of Southern California, and columnist for Dan Abrams’ Law Newz. Before starting her own private practice, she was a vice president in the litigation department of Fox Entertainment Group in Century City, where she oversaw litigation involving Fox Television Stations, Twentieth Century Fox Film Corp., and National Geographic. Her areas of practice include defamation, privacy, right of publicity, copyright, reporter subpoenas, and SLAPP litigation. Before working for Fox, she worked as an attorney for Davis Wright Tremaine in Los Angeles. One of her recent articles for the American Bar Association Communications Lawyer was “Donald Trump is a Libel Bully but also a Libel Loser.”