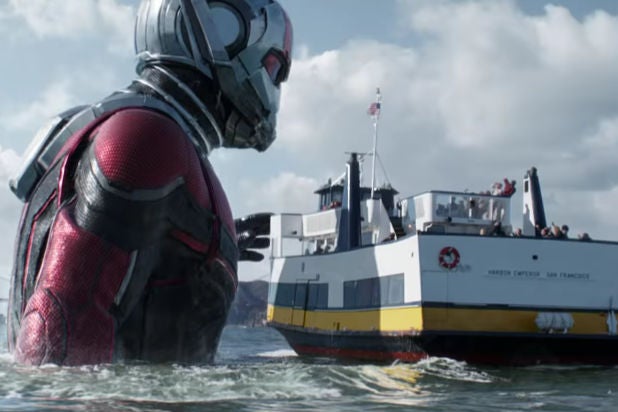 Marvel screened “Ant-Man and The Wasp” for the entertainment media for the first time Friday night, and they seem to have loved it.

The consensus on Twitter is that it’s hilarious, better than the original, and a really good way to follow up “Avengers: Infinity War.”

But for those of you hoping that it’ll tie directly to the wild events of “Infinity War,” it appears at least to those of us who haven’t seen it that, if it does, it does so only tangentially. But people who saw it don’t seem to mind at all — and many are positively effusive about the Peyton Reed-directed follow-up to his 2015 original.

Also Read: 'Luke Cage' Season 2: All the References to the Rest of the Marvel Cinematic Universe

“Perfect comic chaser to the doom and gloom of Infinity War,” said one critic. Another says it’s Marvel’s best sequel since “Captain America: The Winter Soldier.”

And, well again, everyone agrees that it’s funny. You’ll see for yourself when it hits theaters on July 6.

Meanwhile, check out the reactions below. And if you want to catch up before you see it, click here, here, and here.

I have emerged from #AntManAndTheWasp and bring good news. This movie is a total blast. Liked it more than the original (which I dug). It’s remains self-contained in the crazy MCU of it all, which is a good thing. Doesn’t ignore its connections to that world, though.

Sooo… #AntmanAndTheWasp is the perfect comic chaser to the doom and gloom of Infinity War. Also, Evangeline Lilly rocks as The Wasp. pic.twitter.com/NrXxy53xHZ

What a year for Marvel! Absolutely loved #AntManAndTheWasp. Stellar ensemble and the humor is spot on. (Laughed myself to tears during one sequence!) The tech is used to great effect yet again. Unique, highly entertaining ride I can’t wait to go on again.

In a surprise to no one @MrPeytonReed's #AntManAndTheWasp is a ton of fun and had the crowd laughing beginning to end. @MarvelStudios has yet another winner. @Kevfeige makes it look so easy when we all know what he's done is next to impossible. pic.twitter.com/coixY7LG40

Dug the heck out of #AntManAndTheWasp. Clever and charming with lots of heart. It’s a bit exposition heavy, but otherwise a damn delight. One gag had me laughing so hard I was in tears and the post-credits scene is easily one of Marvel’s best.

Ant-Man: A bit more charm than the first and more character work. Everyone seemed to love it. I liked it, but not as much as the first one. Pena is awesome again. Must stay for post credits!

Ant-Man and The Wasp is a lot of fun. At its best when it’s almost an over the top silly comedy, less so when it’s about the comic booky villain driven moments. Some fantastic miniature/maxature action sequences. @realmichaelpena steals the show again.

Ant-Man and The Wasp is Marvel's best sequel since The Winter Solider. @EvangelineLilly is one of my new favorite super heroes. @MrPeytonReed knocked it out of the park!! Tremendous movie!

Ant-Man is my favorite Marvel movie. This is the sequel I'd been hoping for. I was grinning from ear to ear from start to finish. Irresistibly good fun. As exciting as it is funny, it locks along nicely and it's visually stunning! #antmanandthewasp pic.twitter.com/7tLSv84ujb

Ant-Man and The Wasp was a fantastic sequel. So much fun, so entertaining from start to finish. The Wasp is awesome & Evangeline Lilly is great! Overall, CAN’T wait to see it again!#AntManandtheWasp pic.twitter.com/qxcoyNGjg5