Note: Spoilers ahead for “First Kill” Episode 1 on Netflix

A kitchen pantry may not be the most glamorous place to make out with your crush for the first time, but it certainly works out for Cal and Juliette in the season premiere of “First Kill” on Netflix. And if you’re still trying to catch your breath from that moment, you’re not alone — it remains a favorite for series star Sarah Catherine Hook.

“First Kill” follows the love story of Calliope (Imani Lewis) — though just Cal is good for her — a monster hunter, and Juliette (Hook), who is, unfortunately, a monster. Obviously, things are a little hard for their blossoming relationship, considering they’re supposed to kill each other. But technically, Cal follows through on that. In the final moments of the premiere, she stakes Juliette in the chest after Juliette gets a little too, uh, worked up during their pantry encounter, and instinctually bites Cal.

Prior to that, things are going pretty well for the pairing! And on the whole, it remains Sarah Catherine Hook’s favorite #Calliette moment (especially since she also had a lot of fun acting with a fake stake in her chest).

“I’ve been saying to pretty much everyone, the pantry scene just really was so special to me. And I feel like it was really well done as far as how we did it,” Hook explained to TheWrap. “I mean as in, on the day that we filmed it, everyone was so professional and communicative. And everyone was down to collaborate and offer up ideas and work at a really diligent pace. It was just one of the better experiences I’ve had in an intimate situation. And then just the way that it turned out, I thought was so stunning, and I think that one, it just really stood out to me. Just everything about it: the music, the angles, the progression, the length of everything was just — I just loved it so much. So I think that was probably my favorite.” 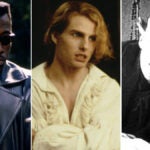 And really, it was a grueling day for everyone involved. Hook recalls that they were in there for several hours. You can watch Sarah Catherine Hook talk through the scene with TheWrap in the video above.

“It felt like we spent a year in that pantry for just 12 hours that we were in there,” she said. “But it felt like I had lived a million different lives. So it’s just, it’s really, it’s an indelible moment for me.”

That said, she’s also pretty fond of Calliette’s confrontation in Episode 2. Because, for as much as it’s a confrontation, it’s also a pretty heavy flirtation. As Cal tries to spurn Juliette’s affections because a monster and a hunter simply wouldn’t work, Juliette simply smirks, and informs Cal that her heart beats very fast when she’s lying.

“When I read that initially, I — my jaw fell to the floor,” Hook said with a laugh. “I was like ‘Victoria Schwab! I. Can’t. Handle this!’ I was like, ‘No, the ladies are gonna freak out! It’s too much!’ But it’s so perfect, because it’s sexy, but it’s like still kind of wholesome and it’s still pure and oh, I love that. I’m so glad you said that. That’s definitely a favorite. It’s so hard to choose.”

All eight episodes of “First Kill” are now streaming on Netflix. 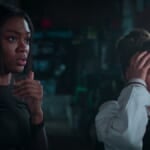