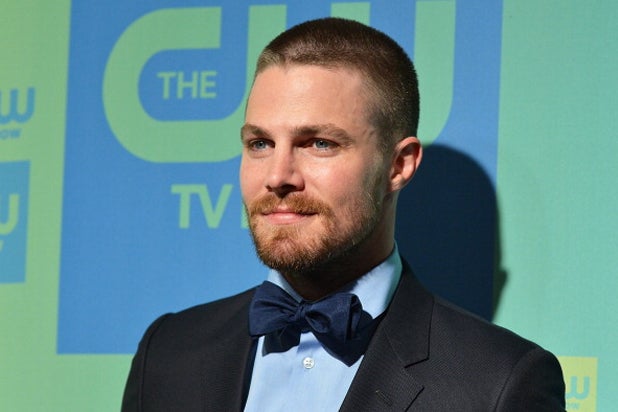 Michael Bay, who is producing the sequel, shared the photo on social media.

The photo shows Amell’s Jones – a self-made street vigilante and sometimes ally of the Ninja Turtles in the original comics – wearing a tattered hockey mask, faithful to his sports-themed antics in the comics, and wielding a hockey stick.

“Earth to Echo” director David Green is taking over directing duties on the now-filming sequel from Jonathan Liebesman.

The first film, released in 2014, left the door open for Megan Fox and Will Arnett to return alongside the reptilian heroes in a half shell — Leonardo (Pete Ploszek), Raphael (Alan Ritchson), Michelangelo (Noel Fisher) and Donatello (Jeremy Howard).

The film, panned by critics, grossed $477 million worldwide and reignited the “Turtles” franchise, which offers no shortage of lucrative merchandising opportunities.

Josh Applebaum and Andre Nemec are returning to write and executive produce the sequel, which is slated to hit theaters on June 3, 2016 in order to keep the momentum from the franchise going.

See the first photo of Amell as Casey Jones below.