Two established media properties in New York are prepping launches that are looking to take a big bite out of the Big Apple. And now they have launch dates.

The Wall Street Journal is said to be launching its much-anticipated New York section on April 26. (That’s two weeks later than the earlier rumored start date, according to the New York Observer.) The Rupert Murdoch-owned paper has yet to announce a launch date or talk much about it publicly, but Murdoch acknowledged his not-so-secret plan to take on the New York Times earlier this month.

The paper has been staffing up for its New York section launch for months, although it just lost one of those hires – Kate Taylor, a former reporter at the New York Sun – to the Times’ culture desk.

Meanwhile, ESPN is prepping another local digital vertical – this one for New York. Unlike the Journal, the network has been able to corral a few high profile names: Leon Carter, the longtime and well-respected Daily News sports editor, as executive editor of ESPNNewYork.com; and Adam Rubin, the Daily News beat writer covering the Mets, is jumping to ESPN, too.

The site launches April 2, coinciding with the start of the Major League Baseball season.

Here’s a screengrab of ESPNNewYork.com: 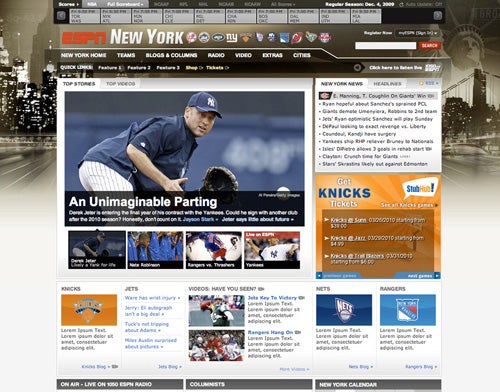