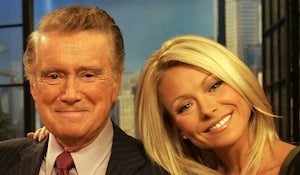 Regis Philbin announced Monday morning that he will be taking a leave from his show following his hip surgery next week, and is expected back early in 2010.

The 78-year-old talk-show host is having his hip replaced next Tuesday when he returns to New York. "Live With Regis and Kelly" is currently taping on location in Las Vegas.

“I’ve been limping around here, and it’s really been painful," he said at Monday’s taping. "So we’re going to get it done."

There was no announcement as to who would take his place in the interim, and he did not elaborate on his return date.

In a statement, Disney-ABC Domestic Television, which produces and distributes the show, said Philbin should be back by early January.

"As Regis announced on today’s ‘Live! With Regis and Kelly,’ on Dec. 1, 2009, he will undergo hip replacement surgery. Recovery for this procedure typically is estimated to be four to six weeks, and Regis expects to return to ‘Live’ as soon as possible."