Michael Irvin and Tim Tebow will be among the guest rotation on “First Take” that appear opposite its now solo star Stephen A. Smith.

Irvin will join the show on Mondays during the NFL season, while Tebow (who was attempting an NFL comeback as tight end with the Jacksonville Jaguars) will bookend each week on Fridays. 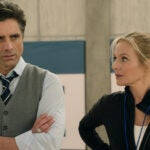 “This new format will pair Smith with new voices and perspectives every day of the week who will challenge him on their specific area of expertise in a completely new way,” said Antoine Lewis, senior coordinating producer, ‘First Take.’ “Stephen A., Molly and a lineup of A-list guests will definitely continue to provide fans with all they’ve come to expect from ‘First Take’ and much more. We’re excited to get going!”

In addition to joining ESPN Radio’s morning lineup, Kellerman will also get a new series on the television network, though no details were provided. He will also continue to host the weekly boxing show, “Max on Boxing” on ESPN2.

Kellerman’s afternoon radio show, “The Max Kellerman Show,” will come to an end when the new changes take effect Sept. 7.