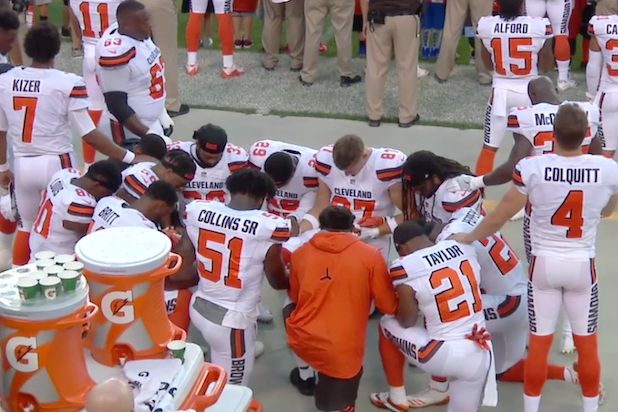 At least 12 members of the Cleveland Browns knelt during the National Anthem prior to Monday’s pre-season game against the New York Giants. Among the dozen players was Seth DeValve, who is the first known white player to protest the anthem since Colin Kaepernick first did it last year.

DeValve is married to an African-American woman and said the recent violence at a white supremacy rally in Charlottesville, Virginia, influenced his decision.

“I myself will be raising children that don’t look like me, and I want to do my part as well to do everything I can to raise them in a better environment than we have right now,” DeValve told ESPN. “So I wanted to take the opportunity with my teammates during the anthem to pray for our country and also to draw attention to the fact that we have work to do.”

DeValve continued: “It saddens me that in 2017 we have to do something like that … I personally would like to say that I love this country. I love our national anthem. I’m very grateful to the men and women who have given their lives and give a lot every day to protect this country and serve this country. I want to honor them as much as I can.”

Browns head coach Hue Jackson told ESPN that he respects his players and “the flag,” and said the group had discussed the decision with him before they followed through.

“We did it out of respect,” Christian Kirksey told ESPN. “No disrespect for anyone, we just felt like it was the right time and the need to do it.”

Kaepernick, who first took a knee during the anthem last year to protest police brutality, is currently a free agent looking for work. Many pundits feel he is being blackballed because of his political views.

The Browns players said they were not sure if the protest would continue during future games.