Looking to revisit a few classic “Simpsons” episodes while quarantined? We’ve got you covered, but this isn’t going to be another “Best of ‘The Simpsons'” list.

Those have been done countless times already, and inevitably you’re going to be recommended the same episodes: “Homer’s Enemy,” “Lisa the Vegetarian,” “Homer at the Bat” and “Marge vs. the Monorail” will most likely be in there — and they should. They’re great episodes.

We’re not going to do that here, though. Instead, I reached out to former “Simpsons” writer and showrunner Bill Oakley to help pick a few hidden gems from the show’s ’90s heyday. (You might also know Oakley as “the Gordon Ramsay of fast food” on Instagram, as TheWrap previously reported, as well as the muse behind one of the internet’s most popular memes.) These are the episodes that don’t get the shine they deserve, but nevertheless should be priority viewing while you’re stuck at home due to the coronavirus outbreak.

Let’s run through the 5 classic “Simpsons” episodes any new fan needs to check out — and any old fan should revisit. 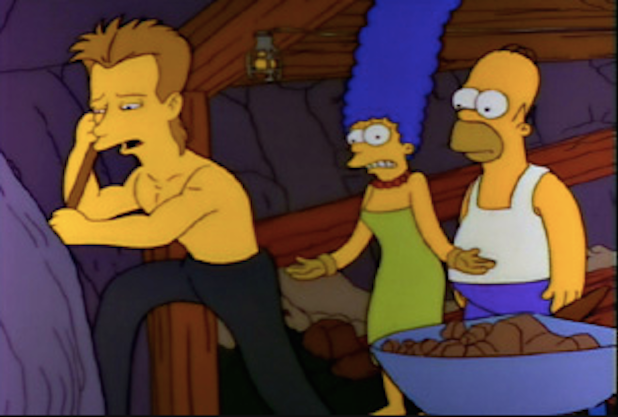 The gist: Bart lowers a portable radio down a well to trick Springfield into thinking “Timmy O’Toole” had fallen in. Soon after, Krusty the Clown is enlisting Sting to help with the charity single “We’re Sending Our Love Down the Well.” Bart’s prank backfires, though, and leaves him in a pinch.

Oakley says: This is my favorite “Simpsons” episode of all time, and it never appears on anyone’s top 200 list. This episode, I believe, is the perfect “Simpsons” episode in terms of the mixture of material that’s in it. It has everything that made “The Simpsons”great, and it appeared at a time when the Simpsons were just cranking out the classics.

Every single scene was brilliant. It had musical guests, it had Sting in a hilarious role, it had that hilarious “We are the World” parody, [and]  it had that whole thing about a kid falling down a well, which was very trendy at that time. It had such a great mix of everything that makes the Simpsons great: social satire, a really enjoyable, relatable story with a number of surprise twists, a really funny ending, a great celebrity cameo that didn’t overpower the scene that he was in, and so much cultural stuff.

This one, it doesn’t stand out like “Deep Space Homer” or the monorail episode — something that’s extremely high concept. [Radio Bart] is actually very low concept, and relatable. And I think sometimes the best “Simpsons” episodes are like that. Jon Vitti, who wrote this episode, is a magnificent writer and one of the best people “The Simpsons” ever had handling emotional, sincere scenes.

Oakley’s favorite joke:  It might be the part with Sting, which is so weird because usually it isn’t the celebrity cameo that makes me laugh the most. But with Sting, they’re digging a rescue tunnel, and Sting is like “one of my fans need me,” and Marge says she’s never heard Bart listen to any of his records. And Homer says “Shhh, Marge. He’s a good digger.” 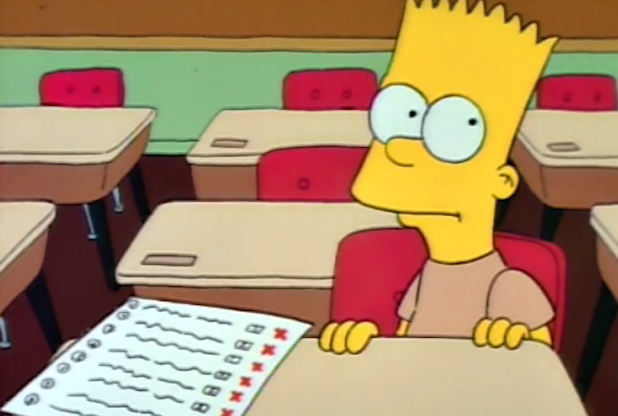 The gist: Bart fails multiple tests, leading him to brink of having to repeat the fourth grade. He eventually prays for a miracle to buy him more time to study for an upcoming test. When his prayer is answered thanks to a snow day, he’s left to cram while everyone parties outside his window.

Oakley says: This episode is so good. This was also when the Simpsons was at its absolute height in terms of ratings. It’s another Bart episode, and I think it’s extremely hard to do emotional Bart episodes. The [Bart Gets an “F”] story is so simple yet so relatable: Bart is going to have to repeat the 4th grade. And this, of course, is like the first time they’ve done this. Rather than Bart having to repeat the 4th grade being done 25 times now, this is the first time. (Laughs) You can really feel for him.

Oakley’s favorite joke: It’s the scene where everyone is out and Bart has to stay inside. It’s so painful and deliciously executed. Bart prays for a miracle  to avoid his test, and then it snows. Everyone is out ice skating and sleigh riding, and he’s [stuck inside] studying.  That’s when I was like, I’ve never experienced that personally, but it was so enjoyable to watch.  I had never felt more connected to Bart than when he had to stay in and study and everyone else was outside in the snow playing. 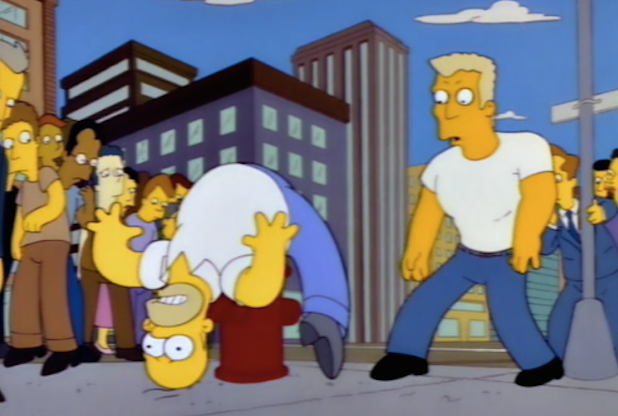 The gist: Homer forgets to pickup Bart from soccer practice on a rotten day for weather, leading a spiteful Bart to look for a mentor from The Bigger Brothers program. He’s assigned a cool, strapping young pilot named Tom (voiced by Phil Hartman) as his “big brother.” An irritated Homer ends up getting his own little brother, named Pepi (whom he accidentally calls “Pepsi”). Eventually, Homer and Tom end up in a one-on-one showdown.

Oakley says: People know this one, but it gets lost because it’s between “Marge vs. the Monorail” and “Last Exit to Springfield” and all these other really famous episodes. But it’s so good, and it’s another emotional Bart episode that’s not really big. This was also an episode that was written for Tom Cruise, and that’s why the character was named Tom. But he turned it down, so they got Phil to do it, and he was obviously excellent at every role he was given.

It’s a very simple story and there’s so much delightful, relatable comedy. Everything about that beginning sequence where Homer forgets to pickup Bart at soccer practice is so funny, and then that part where Homer is like melting when he comes to pick him up is so good. There’s also a lot of really good ,funny pop culture stuff in this, like the whole subplot with Lisa calling the “Corey hotline” and running up the phone bill. That was really funny. Also, the parody of “Saturday Night Live” with Krusty makes me laugh so much. [Krusty during his opening monologue on “Tuesday Night Live”: “We got a great show for ya! Well, actually, the last half hour is a real garbage dump.”]

Oakley’s favorite joke: The whole third act — the fight. It’s a parody of “The Quiet Man,” which I’ve never seen, but I believe it’s just a fight all across town and is very memorable. When Homer gets knocked over onto the fire hydrant, and it’s poking right into the middle of his back… it looks so painful. And he even says “this is even more painful than it looks.” On Wikipedia, I saw it said part of the comedy of that is how small and realistic the sound is, and I agree.

Oakley on Phil Hartman: So versatile. He’s one of the best comic performers who ever lived, Phil Hartman. Obviously you think of him as Troy McClure and Lionel Hutz, but he was also very good at doing these one-time roles. He just brings a subtly to his performance that you don’t get from so many actors. It was true on “Saturday Night Live” and “NewsRadio” as well, he added a whole layer of comedy to it that you just didn’t expect. He dialed up the comedy beyond what was on the page. 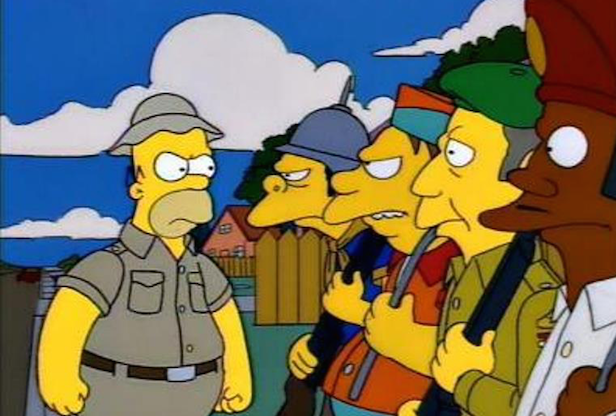 The gist: Homer decides to lead a neighborhood watch group after a cagey burglar (voiced by Sam Neill) steals Lisa’s saxophone. Eventually, Homer tracks down the elusive crook — but runs into problems trying to bring him to justice.

Oakley says: This is the craziest of all the episodes on my list. And there are so many episodes from Season 5 and 6 that are iconic, it’s hard to find a couple that won’t have something that everyone is always talking about. This is one of them, I think.

It’s the perfect John Swartzwelder episode. There’s a lot of craziness and here isn’t very much emotion, but it’s a great, classic Homer story. Homer is in character the whole time. Also, Sam Neill gives a great performance, too, which is easily lost in the morass of great ‘Simpsons’ performances over the years. He really gave that character a lot of zest.

Oakley’s favorite joke: It’s the whole third act which is a parody of “It’s a Mad, Mad, Mad, Mad World,” which is probably my favorite movie. So that’s one of the reasons I’m partial to this.

Oakley on Swartzwelder, the most prolific “Simpsons” writer ever: I think he’s a comedic genius. I don’t think you’d ask him to write an emotional episode, you’d give that to Vitti. (Laughs) But he’s got an immense library of old-time comedy — really hilarious slapstick and silent film stuff — in his head. But he’s also able to put it together in a way no one would ever think of. And that’s why Swartzwelder is one of the most valuable writers “The Simpsons” ever had.  When people see episodes with his credit on them, they know they’re going to get something amazing, with a lot of comedy that no one else could’ve come up with. 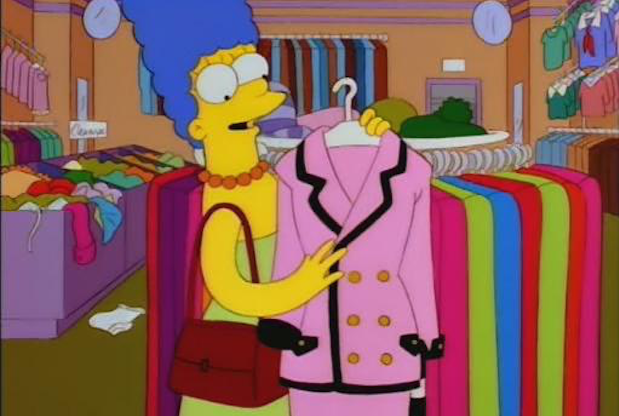 Scenes from the Class Struggle in Springfield (Season 7, Episode 14)

The gist: After finding an expensive Chanel suit that’s been severely marked down at a discount store, Marge finds herself being invited by an old friend to the Springfield Country Club. Desperate to fit in, Marge winds up altering the suit several times for her repeat visits to the golf course. Ultimately, she runs into problems tailoring her suit — and comes to grips with what she really wants in life.

Oakley says: This is about Marge, and it’s the only Marge episode on this list. Marge episodes rarely appear on anyone’s list of favorite ‘Simpsons’ episodes [because] she is a hard character to write for. It’s hard to make episodes that are relatable and enjoyable for Marge because she’s not a silly character. She doesn’t do a lot of wacky things. And I think this episode written by Jennifer Crittenden is possibly the best Marge episode I’ve ever seen because it’s a very realistic story. And I think you can feel Marge’s pain, with this chance to move up in society, and then it’s gradually falling apart due to circumstances beyond her control. I think it’s kind of moving, especially in the third act, when Marge has to keep remaking her Chanel suit into something so that she doesn’t look like a goof at the country club. Then when it finally falls apart, I certainly can feel her pain.

There’s also a really funny, silly subplot of Homer being good at golf. I love it when Homer is fairly competent at things. And he turns out to be pretty good at golf, and him playing with Mr.Burns is a really simple, funny story. Tom Kite provides a funny appearance as himself as a golf pro. There’s also Mr. Burns making a cake and saying “I pickled the figs myself,” stuff like that. There’s a lot in this episode I like.

Oakley’s favorite joke: It’s not that it’s particularly good, but it’s the abalone sandwich. (Laughs) It’s Kent Brockman’s daughter, who barely ever appears, ordering it and telling that guy she’s mad because she didn’t want a baloney sandwich, she wanted an abalone sandwich. That was a joke in the writer’s room for years, and we could never figure out a way to force it into the episode. And it’s not even a funny joke! But the idea of someone who really wants to eat abalone, and got mad because someone justifiably confused it for a request for a baloney sandwich… it makes me laugh, if only for my personal reasons.