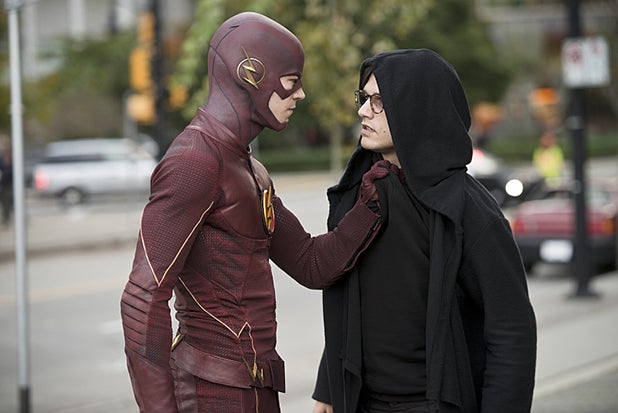 Sonic supervillain Pied Piper aka Hartley Rathaway finally makes his debut Tuesday on CW’s “The Flash” in the form of  Andy Mientus, and the actor couldn’t be more psyched to be facing off against Grant Gustin’s titular character. Mientus teased the action-packed episodes, revealed what he thinks makes Pied Piper so unique and the impact of playing a gay comic book villain.

“Piper is not the most battle savvy villain that we’ve encountered so far. He’s probably the worst fighter of any of the villains,” Mientus told TheWrap. “He’s truly scary in some parts, really vulnerable in other parts and also funny a lot of the time. He’s not a typical villain.”

The freshman series is so white hot for the network that there’s already buzz all over social media about spinoff possibilities. Most are betting on Atom (Brandon Routh of “Arrow”), others are guessing Firestorm (Robbie Amell/Victor Garber), but why not Pied Piper?

When asked about spinoff potential for Piper, the humble “Flash” newbie said: “I’m definitely open to a Pied Piper spin-off. He’s one of the more fascinating characters I’ve seen in the DC universe and a fan favorite because he’s so different than everyone else,” “Whether or not he could be the anchor of [a series] I’m not sure, but as the actor I’d obviously be thrilled.”

Mientus, who previously starred as Kyle Bishop on NBC’s “Smash” and in a shorter run on ABC Family’s “Chasing Life,” made headlines in October when he was cast as Piper, one of the most popular gay characters in the DC Comics universe.

In addition to speaking about spinoffs and supervillain sexuality, the 28-year-old screen and stage star — he made his Broadway debut in a 2014 production of “Les Miserables” — teased Pied Piper’s infiltration of STAR labs and inevitable showdown with Flash.

TheWrap: What did you think when you saw yourself as Pied Piper for the first time?
Andy Mientus: Well, I actually hate to watch myself. But so far I haven’t been scared away by the trailers, photos or ADR. I’ll probably watch it because I’m curious to see how all the visual effects and stunts turn out.

Pied Piper makes a great joke to Barry in the trailer about loving men in leather, but later he looks menacing. How do balance the two sides of his character?
Piper is not the most battle savvy villain that we’ve encountered so far. He’s probably the worst fighter of any of the villains … he’s not so different from the rest of the kids in STAR Labs. He’s truly scary in some parts, really vulnerable in other parts and also funny a lot of the time. He’s not a typical villain.

Will we see that on “The Flash”?
I can’t speak to where things are going, but when you meet Piper you’ll see pretty quickly he’s not a typical villain. Maybe his motives aren’t so completely sinister. Maybe there is some good, intent but poor execution on his part.

At TCA the showrunners confirmed another spinoff is in the works. Most are betting on Atom (Brandon Routh of “Arrow”), others are guessing Firestorm (Robbie Amell/Victor Garber), but why not Pied Piper?
I’m definitely open to a Pied Piper spinoff. He’s one of the more fascinating characters I’ve seen in the DC universe and a fan favorite because he’s so different than everyone else. He’s a bit of an outcast even within the Rogues, doesn’t quite vibe with the other guys on the team. He’s completely fascinating and fun to embody. Whether or not he could be the anchor of [a spin-off series] I’m not sure, but as the actor I’d obviously be thrilled.

Speaking of … can you talk about when Pied Piper will join forces with other Rogues villains, like Heat Wave (Dominic Purcell) and Captain Cold (Wentworth Miller)?
Not yet, unfortunately. But what’s cool about Piper’s story is that he’s one of the first villains on the show who gets to play with all of the STAR labs kids. And where the other villains played with Flash in his suit, Piper gets to play with Barry.

Which STAR labs hero does Pied Piper have the best chemistry with? Is it Cisco (Carlos Valdes)?
Carlos and I went to school together and have known each other for the better part of a decade now. We had great chemistry and great exchanges because we had history together. [But Piper] sees everybody in STAR labs. Without giving too much away… I get in there and wreak havoc on all of their lives. It’s really, really fun for me.

Your characters on “Smash” and “Chasing Life” died. Can we expect the same for Pied Piper on “The Flash”?
[Laughs.] It’s better to make an impact then to just fade away and not show back up again. I love “The Flash” and the people I work with, so I would selfishly like him to stay alive for that reason. If the character needs to go down in a blaze of glory then I’ll be the vessel to tell that story, but I am attached to him.

As an openly bisexual actor, what does it mean to play an openly gay TV villain, especially one who gets to have fun with his sexuality?
It speaks to the progress of the integration of gay characters on TV and in the media.

With Pied Piper there is definitely room in the future for his sexuality to come up in a major way, but in his introduction that’s not the focus. It’s huge progress because if you introduced a gay character on a show, 10 years ago it would be a big thing and probably cause a controversy. But now we live in an age where there is a gay character on almost every show. Not just on premium, edgy cable channels, but on network and teen shows. It’s everywhere, including on superhero shows. People think the [superhero] audience is adolescent, straight males. But it’s much more diverse and they’re ready for this.

Are you nervous about how hardcore DC Comic fans will respond to your Pied Piper portrayal?
Only because I know this character is a fan favorite. It means a lot to so many people and I respect that. Also, being someone who wasn’t necessarily a fan of these comics growing up, I want to make sure I get Piper right. I don’t want people to think I came in without no regard for the character’s legacy and history. So, I’m nervous about that.

I just want to do the character justice, to do a good job for the people I know who are looking forward to this.

Watch a trailer for “The Sound and the Fury” here.