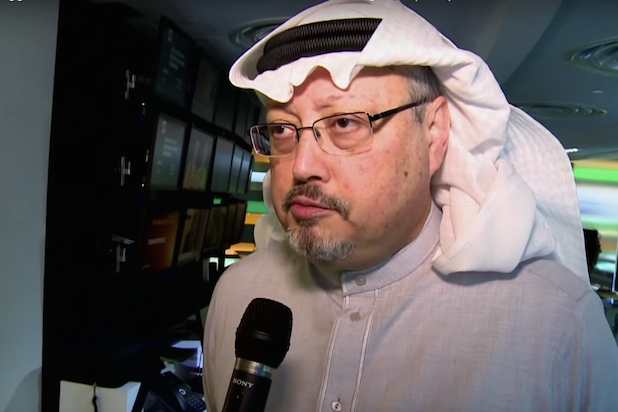 In the wake of President Trump’s muted response to the suspected murder of Jamal Khashoggi, old reports are resurfacing showing that Khashoggi previously faced consequences for his commentary about the incoming president back in 2016.

The Saudi Arabian Washington Post columnist wasn’t just a fierce critic of his own nation, but also had sharp words for the real estate mogul as well — so sharp in fact that he got himself banned from appearing in Saudi media over the issue, according to numerous contemporary media reports.

“Saudi authorities banned journalist Jamal Khashoggi from writing in newspapers, appearing on TV and attending conferences,” Middle East Eye reported in December 2016, citing Arabic sources. “This came after Khashoggi’s remarks during a presentation he made at a Washington think-tank on 10 November in which he was critical of Donald Trump’s ascension to the US presidency.”

“When his advisers show him the map, will he realize supporting Putin means supporting the Iranian agenda? And this is what Saudi Arabia is concerned about, to stop Iranian hegemony,” he told reporter Liz Sly.

The old ban was given renewed attention after Los Angeles Times columnist Virginia Heffernan flagged the story on Twitter.

“Just now realizing: Khashoggi was banned in [Saudi Arabia] was not because he was critical of Mohammad bin Salman, the devastation of Yemen, Wahhabism, or the Salafi movement. It was because, ON NOVEMBER 10, 2016, in DC, Khashoggi mildly criticized…Donald Trump,” she tweeted Wednesday.

Just now realizing: Khashoggi was banned in KSA was not because he was critical of Mohammad bin Salman, the devastation of Yemen, Wahhabism, or the Salafi movement. It was because, ON NOVEMBER 10, 2016, in DC, Khashoggi mildly criticized…Donald Trump. https://t.co/GeFh0nlJ0l

On Thursday, the Washington Post published what they said would be Khashoggi’s final column for the paper, which covered diminishing press freedom in the Arab world.

“Arab governments have been given free rein to continue silencing the media at an increasing rate,” he said. “Arabs living in these countries are either uninformed or misinformed. They are unable to adequately address, much less publicly discuss, matters that affect the region and their day-to-day lives.”

Khashoggi filed the piece just hours before he disappeared in Istanbul earlier this month. The Washington Post’s Global Opinion Editor Karen Attiah said in a note at the top of he the piece that the paper had decided to run the column amid the growing consensus that he was dead.

“I received this column from Jamal Khashoggi’s translator and assistant the day after Jamal was reported missing in Istanbul,” said Attiah. “The Post held off publishing it because we hoped Jamal would come back to us so that he and I could edit it together. Now I have to accept: That is not going to happen. This is the last piece of his I will edit for The Post.”

Turkish officials have accused Saudi Arabia of sending a 15-man hit squad into the country to kill Khashoggi at their consulate in Istanbul and chopping him up with a bone saw. Turkish media has obtained secretly recorded audio from inside the building confirming the murder, the New York Times reported Wednesday.