It’s becoming hard to keep track of all the fast-moving changes at the trades, on the web, in the newspapers.

But one thing is clear: the traditional trades are fast giving away to what’s happening in the online space.

Now comes word that Daily Variety’s Mike Fleming, previously of the Dish column (no, not the Dishrag, that’s something else), and lately having launched a deal blog with his former boss Peter Bart, is leaving — to Nikki Finke’s Deadline.com, of all places.

This is good news for Finke, who has been trying to fill a slot for an east coast reporter for seven-plus months. Fleming will be the Deadline editor for New York, covering not just film but "offering analysis about books, media, TV news, theater, and other Gotham-based infotainment arenas," according to the press release. Deadline has also hired Tim Adler, an apparently well-known entertainment journalist based in London.

This is very bad news for Variety, which has watched the wholesale departure of talent – mainly by shoving them out the door. Now the voluntary departure of a talented, news-breaking reporter like Fleming is a very bad sign indeed, just as the trade has made two high-level hires – of Daily Variety, and Variety.com – of journalists who have no knowledge of the entertainment industry.

Indeed, with the loss of veteran Mike Speier (who briefly joined TheWrap last year), the departure of Fleming, the upstairs bump of ex-editor Peter Bart and the removal of Dana Harris to supervise a subscription product, I wonder how many people are left at the trade to report on and parse the film industry.

As for Fleming, a 20-year veteran of Variety, he is certainly in for a new experience with Finke – but then, he must know that.

The last mention of Fleming at Deadline was a post in which Finke – who on Sunday referred to him online as a "friend for close to 20 years" – called him a "hypocrite" and "desperate to get noticed."  I guess that’s what they refer to as "Hollywood friends." 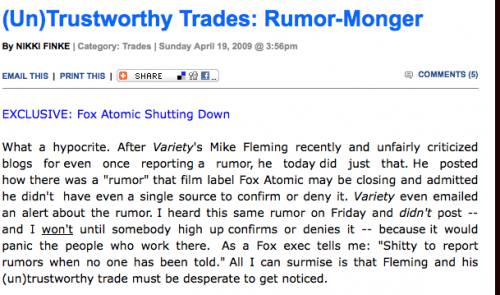