Kaley Cuoco is juggling the demands of her double life in Season 2 of “The Flight Attendant.”

A trailer released Monday, which you can watch above, shows Cuoco’s Cassie on cloud nine as she’s living her best life in Los Angeles while settling into her secret life as a CIA operative. But, when an overseas assignment leads her to inadvertently witness a murder, she becomes entangled in more international intrigue.

The pressure forces Cassie to confide in her closest friends about her new gig. As she investigates the slaying, she also realizes the killer might be more familiar than she had initially thought when she’s confronted by a room full of her doppelgängers.

Eventually, the revelations send her into a spiral. “I’m one tiny accident away from a complete collapse,” she admits. 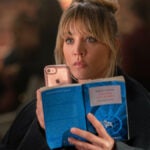 “The Flight Attendant” Season 2 debuts with two new episodes on HBO Max on April 21. Episodes will drop weekly through May 26.