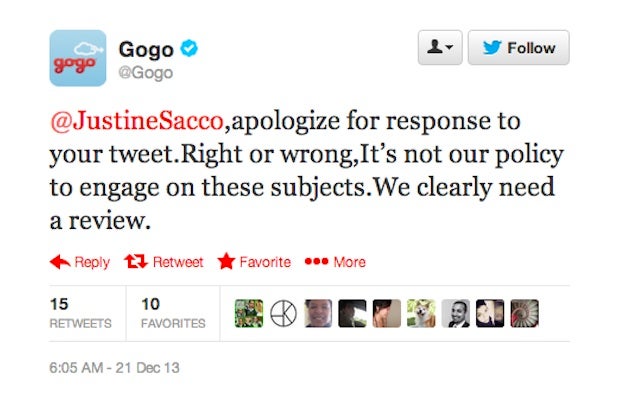 On Friday, the company tweeted:

Next time you plan to tweet something stupid before you take off, make sure you are getting on a @Gogo flight! CC: @JustineSacco

The “something stupid” Gogo referred to is a tweet by Justine Sacco, a corporate communications staffer at Barry Diller’s media company IAC.

The spokeswoman gained notoriety for a tweet she wrote before a trip to Cape Town, South Africa that offended many and generated loads of social media responses.

Although Gogo got a mix of responses to its tweet, it defended the decision when one person called their action shameful.

@DouglasCrets You made our point. With inflight connectivity the full story would have already been out there.

On Saturday morning, they had a change of heart and tweeted the following apology to Sacco.

@JustineSacco,apologize for response to your tweet.Right or wrong,It’s not our policy to engage on these subjects.We clearly need a review.

A Gogo spokesman Steve Nolan explained to AllThingsD that the company is reviewing the tweet as it’s not within their policy to get involved in such issues.

“We feel it’s not our role to engage those types of borderline topics to raise some activity in social media,” he said. “Our policy is pretty simple: to try to keep people informed or connected in-flight. It’s more of a customer-care operation than to try to stir the pot.”

As for Sacco, she later deleted her account, presumably upon arriving to her destination and seeing that her employer had denounced the tweet and that it had generated so much attention.

Sacco’s employment status wasn’t immediately clear as of this posting, but IAC had removed her name from its website’s media contacts list by the time she landed.