Flixster, the movie-listings and reviews site focused on social networking and mobile users, has acquired a majority stake in critical aggregator Rotten Tomatoes from News Corp., creating what could be a formidable rival for visitor-rich IMDB.com — at least in terms of web traffic and ad revenue.

News Corp. division IGN, which owns Rotten Tomatoes, will retain a minority stake in the movie ratings site in the swap described by a knowledgeable executive as an "all stock deal." Terms were not disclosed.

While Flixter and Rotten Tomatoes will continue to operate separate web properties, the deal is seen as posing the first serious threat to IMDB.com, the popular movie and actor database.

The combination creates an entity that brings in 30 million unique visitors per month, according to the 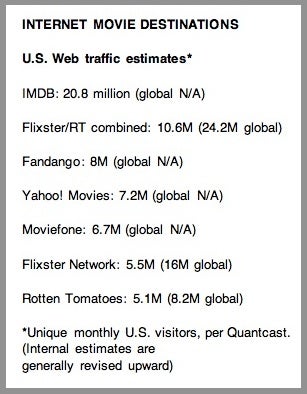 companies, putting them in the range of — if not eclipsing — IMDB in terms of traffic, the predominant factor in attracting advertisers online.

“We think this is a blockbuster,” Joe Greenstein, co-founder and CEO of Flixster, said in an interview with TheWrap. “Rotten Tomatoes is an iconic brand, an authoritative voice of critical opinions on movies. And with Flixster, we have (and can tap into) the user buzz surrounding a movie, using any mobile device. So the vision is that we can become the single-most useful resource for someone trying to decide what movie they want to see.”

Three-year-old Flixster provides film-related content such as quizzes, user ratings and listings to sites like Facebook and MySpace, as well as major mobile players like the iPhone and Blackberry. Rotten Tomatoes — which employs the synonymous Tomatometer for its ratings — boasts 250,000 movies, 2.3 billion user reviews, 500,000 critic reviews and more than 20,000 trailers and videos, IGN said.

Roy Bahat, president of IGN Entertainment, will join Flixster’s board of directors.

This isn’t the first time the sites have teamed to take on the likes of Moviefone and Fandango, which also offer movie reviews in addition to listings. Flixster had previously been running Rotten Tomatoes reviews on its site.

According to Quantcast, IMDB receives about 20.8 million unique visitors per month in the U.S.; Flixster gets 5.5 million — though about 16 million globally. Rotten Tomatoes gets roughly 5.1 million uniques, per Quantcast figures.

Going by traffic data alone, the Flixster-Tomatoes combination would give it an edge on other sites in the space, including Fandango (8 million unique visitors per month) Yahoo! Movies (7.2 million) and Moviefone (6.7 million).