All eyes around the world are going to be on Floyd Mayweather and Conor McGregor come Aug. 26, when the fighting legends finally enter a ring together.

The most recent Vegas mega-fight — Mayweather vs. Manny Pacquiao in May 2015 — sucked in a more diverse lineup of household name celebrities than any of Hollywood’s awards shows since. 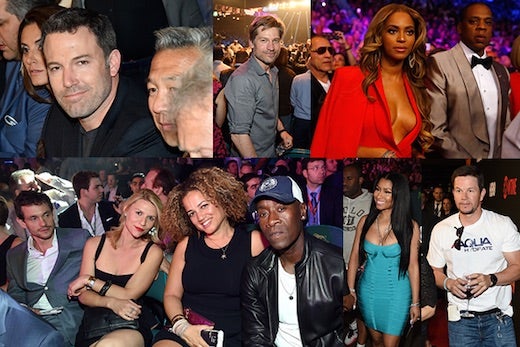 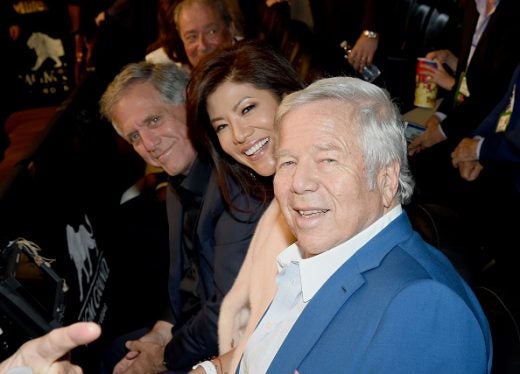 New England Patriots owner Robert Kraft got a close-up look at the allegedly hoarse and tipsy Tom Brady, who arrived hot off a plane from the Kentucky Derby several time zones away.

While Mayweather is favored by all bookies and experts in his historic bout with McGregor, the hype machine will point to his two-year layoff as a weakness. As a lot can change in two years … 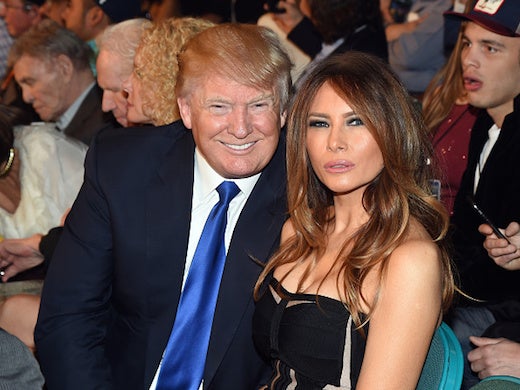 Back then, Getty Images captioned this exact photo as “model Melania Trump,” before she became  first lady, and her husband was president.

Also Read: Melania Trump's Cyberbullying Speech Trashed on Twitter: 'Her Hubby Is Leader of the Pack'

While the guestlists and national security profiles fluctuate, the overall celebrity industrial complex orbiting a Mayweather mega-fight has not.

Here are Hollywood’s top invites for the upcoming mega-fight weekend.

Also Read: Mayweather-McGregor: How to Save 4 Cents By Watching Online 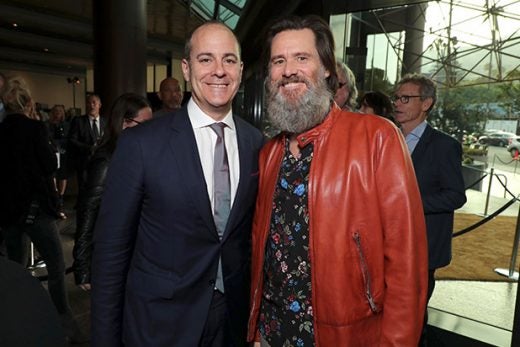 Showime President and CEO David Nevins hosts the party before the bell sounds. Inside the T-Mobile Arena, the broadcaster behind Mayweather fights will welcome the top talent coming to the fight.

Beyond this, the remainder of the roundup is open to the public. But grab your wallet. 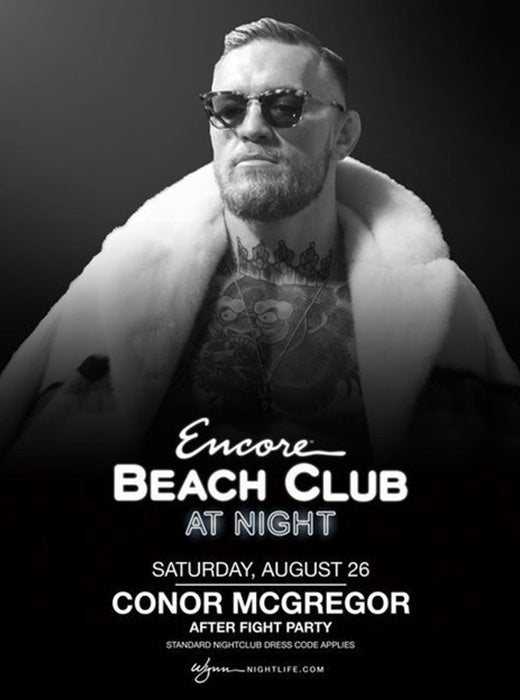 Could we be seeing a shift back to the days of lifestyle personalities like Paris Hilton and Kim Kardashisn headlining nightclubs instead of much higher paid DJ’s?

While McGregor’s in-ring guarantee for the fight will be disclosed the day before the fight, Wynn reps did not have a dollar figure to attach to this residency or answers on what happens if he doesn’t fight three more times after Saturday.

Alex Cordova, Sean Christie and the Wynn Nightlife team have a track record on big deals. Earlier this year, they signed The Chainsmokers to a three year exclusive North American residency.

Tickets for Conor’s post-party start at $30. 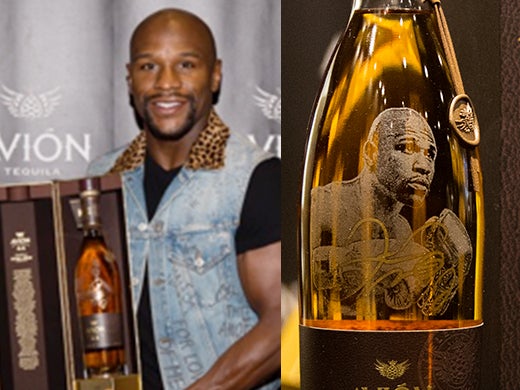 Floyd Mayweather partnered with Avion Tequila to release a special edition $1,500 bottle engraved with his likeness. Only 150 of the Avion 44 Extra Añejo bottles were made, each signed by Mayweather. They come with a certificate of authenticity and a side bottle of tequila at Total Wine & More in Las Vegas. (Courtesy of Avion Tequila)

“Down Goes Cirque! Down Goes Cirque!”
Six of the seven Las Vegas Cirque du Soleil shows are voluntarily going dark on fight night. Instead, they will use their theatres as ticketed viewing parties.

Here are the other top contenders for top fight weekend parties and where to find them in Las Vegas. 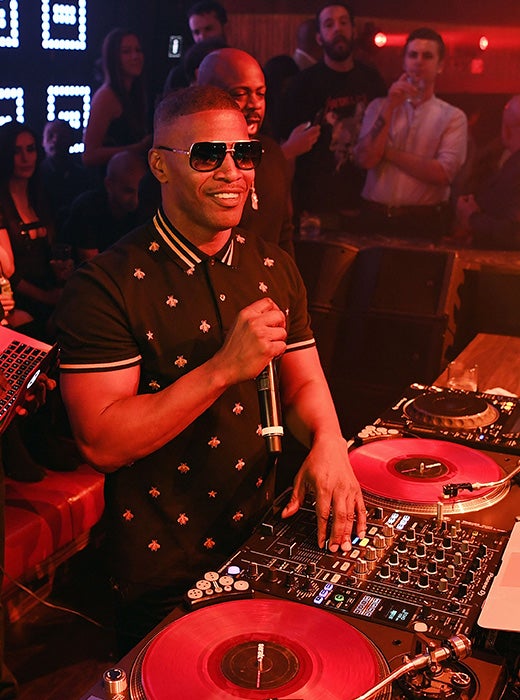 Foxx, a fight weekend regular, will host Jewel nightclub at the Aria on Saturday night. He knows the intimate space and those massive skybox suites well. The micropone-wielding host christened Jewel on opening night last spring.

Ice Cube
“We Be Clubbin” rings true for Cube, running mate Meek Mill, and anyone who has $150 to drop on the cover charge to Rehab’s “day after” party on Sunday afternoon at the Hard Rock. 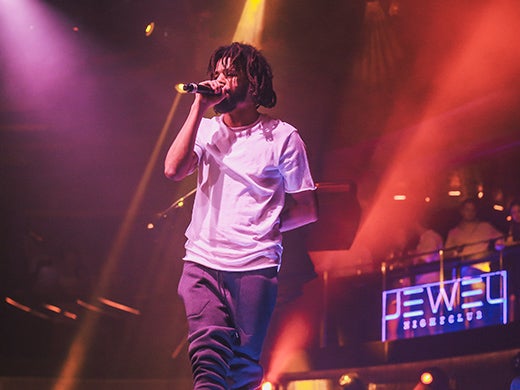 A week before he plays his mentor Jay-Z’s Labor Day “Made in America’ festival in Philadelphia, the rapper lights up Jewel on Friday night. 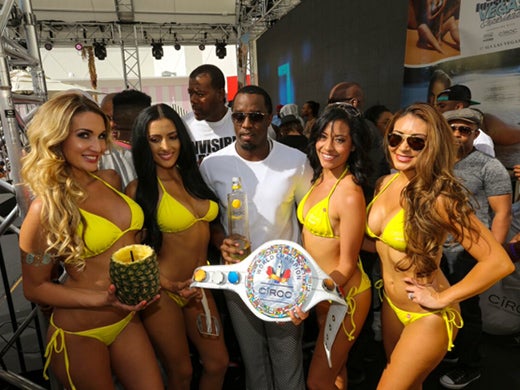 The Bad Boy founder is another fight weekend regular. He will be camped out at the Hard Rock Hotel, hosting the Rehab pool party on Saturday afternoon and Vanity nightclub after the fight on Saturday night.

The DJ’s
Fight or not, the mega-DJ’s are in the peak of the European and North American festival season. It would be a stretch to peg those tending to their long-scheduled Vegas residencies on a late August weekend as out of the ordinary, but with a ton of money and celebrities in town, the volume and table minimums should approach New Year’s levels to party with Vegas’ highest paid entertainers. 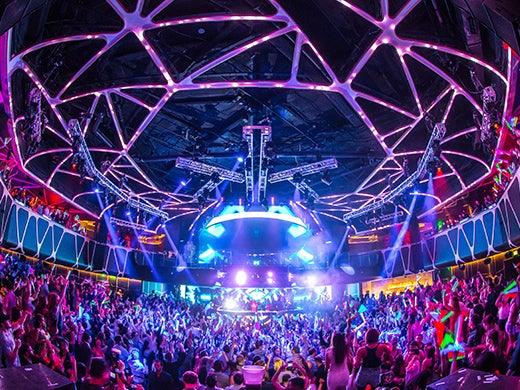 Kaskade
Hakaksan group is double pumping Kaskade on Saturday. He plays Wet Republic by day and Omnia on Saturday night. 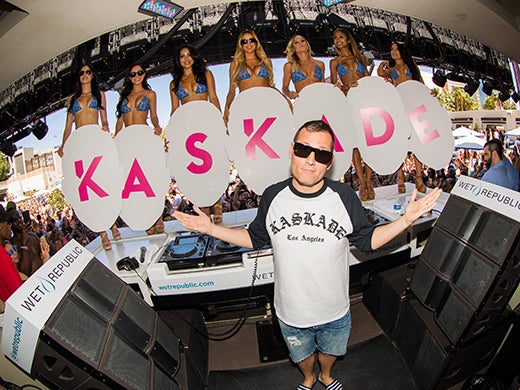 Steve Aoki
The Aoki jet will be on the tarmac in Vegas as he plays Friday night at Hakkasan inside the MGM.

Gucci Mane
The “East Atlanta Santa” will likely spit his new collaboration with the ubiquitous Migos “I Get The Bag” when he plays TAO on Saturday night.

50 Cent
Despite whatever songs Fifty plays here, his best performance will remain the time he challenged former friend Floyd Mayweather to a literacy test of reading “Harry Potter” out loud for $750,000. In his corner at Drai’s on Friday night will be Trey Sonz and Jeezy, part of the club’s smart move towards full-length concerts with full production atop the Cromwell.

McGregor and UFC Fans HQ Viewing Party: Ri Ra at the Shoppes at Mandalay Bay
This authentic irish pub should be ground Zero for McGregor fans. The décor is straight from Ireland, but the cover charge is not: $170.15 with fees via Ticketmaster. Yes, Ticketmaster is handling the ticketing for an Irish pub closed-circuit telecast.

The “Mystic Mac” Conor McGregor Cocktail at the Cosmopolitan 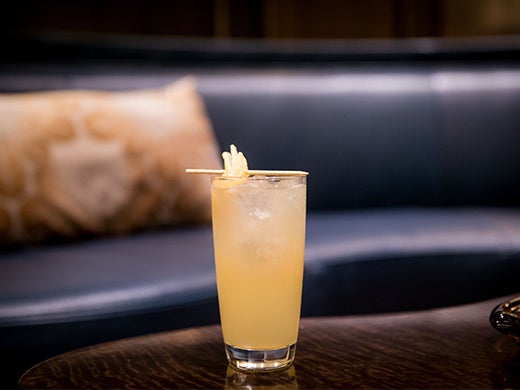 Courtesy of the Cosmopolitan

This cocktail offers a “chance to get your rogue on” with Jameson Irish whiskey, Cardamom, and ginger beer. It’s lean and ginger, just like the Notorious MMA himself. It will be served across the Cosmo’s F&B establishements on fight weekend only.

The Mayweather/Pacquiao fight, a rare Showtime-HBO co-production, drew big names from Hollywood and beyond on Saturday night.