The filmmakers behind the new documentary “Floyd Norman: An Animated Life” credit a chance encounter with Disney’s first African-American animator for sparking the project.

“I met Floyd at San Diego Comic-Con, which as you can see is like this Woodstock for nerds,” co-director Erik Sharkey told TheWrap’s Sharon Waxman at a Q&A Tuesday as part of TheWrap Screening Series. “I was there promoting a documentary about a poster artist named Drew Struzan, who did a lot of the ‘Star Wars’ and ‘Indiana Jones’ posters. He actually did this poster right here for our film.”

Sharkey and his co-director, Michael Fiore realized they could explore the evolution of Disney cartoons through Norman, who worked on such classics as “Sleeping Beauty” and “101 Dalmatians” before being handpicked by Walt Disney himself to join the story team on “The Jungle Book.”

“We very early on realized he was the Forrest Gump of animation,” Fiore said, noting that Norman was hired as the first African-American at Disney in 1956. “We thought we were telling the history of animation told through the life of Floyd Norman but along the way we started to realize there was a lot of layers.”

“When I started talking to Floyd, he just had these amazing stories and just had this incredible rich history in animation, but the thing that really floored me was when he casually said, ‘When I worked with Walt Disney on “The Jungle Book”‘ — he said it so casually and you don’t hear that every day,” Sharkey said. 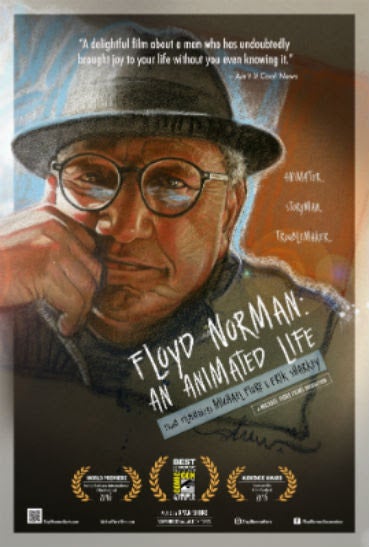 He would later work at Hanna-Barbera on many classic cartoons, including”Scooby Doo.”

After Hanna-Barbera, Floyd’s talents took him to Pixar to work on “Toy Story 2” and “Monsters Inc.”

On Norman’s 65th birthday in 2000, Disney forced Floyd to retire. Refusing to leave his “home,” Floyd has “hijacked” a cubicle at Disney Publishing, unpaid, for the past 16 years, picking up freelance work when he can.

At 81, he continues to have an impact as both an artist and a mentor. Norman plans to “die at the drawing board.”

From Mickey Mouse to ”Paperman,“ ”Tin Toy“ to ”Piper,“ Disney and Pixar have created animated gems with their recent shorts