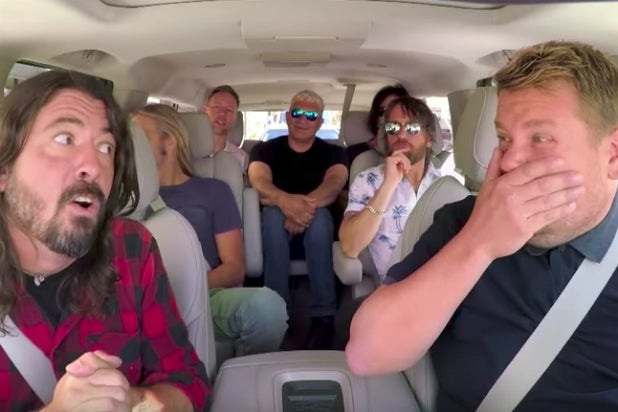 The greatest band on the planet just piled into one SUV for a rocking “Carpool Karaoke.”

Joining James Corden’s Southern California commute to work, the members of Foo Fighters talked travel arrangements, being a bit starstruck by each other, and of course, that (legendary) time frontman Dave Grohl broke his leg mid-concert and kept playing.

It’s way grosser to hear Grohl share the details of that incident, but he swore it was “the best show we’ve ever had.”

Also Read: Watch Rick Astley and Foo Fighters Mashup 'Never Gonna Give You Up' and 'Smells Like Teen Spirit' (Video)

Later, at a Guitar Center, the “Late Late Show” host got his a– handed to him in a drumming contest. He did masterfully handle Rick Astley’s role in an impromptu “Smells Like Teen Spirit/Never Gonna Give You Up” mashup, however.

A spontaneously formed crowd ate it up, and we think you will too. Watch the video above.