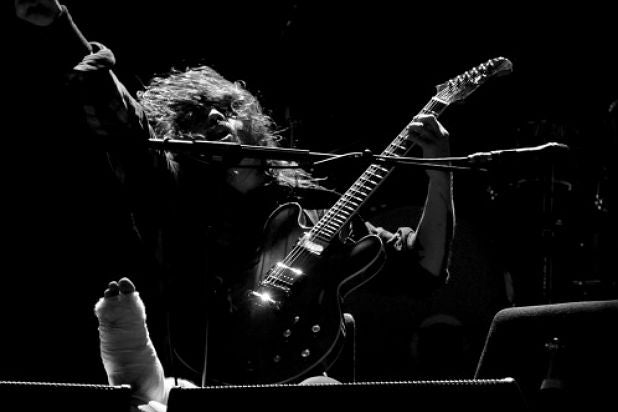 The Foo Fighters have been forced to cancel the rest of their U.K. and European tour following Dave Grohl’s fall from a Swedish stage on June 12.

The frontman took a violent tumble while performing “Monkey Wrench” in Gothenburg, Sweden, and while he returned to finish off the show, his doctors required the cancellation of all the remaining dates, according to a post Tuesday on the band’s website.

It was previously announced that the band’s June 14 appearance at the Pinkpop Festival and June 16 show at the AFG Arena in St. Gallen, Switzerland, would be cut, and now the following dates have now been added to the list:

Also Read: Dave Grohl Breaks a Leg But Goes on With the Show

Grohl took to the Foo Fighters’ blog on Tuesday to share his remorse over the canceled tour — and reveal the full extent of his injury to fans. After making a mad dash to “shred some tasty licks for the kids up front,” Grohl said he “wound up feet first over the Edge (pun intended), dropping about 12 feet, dislocating my ankle and snapping my fibula like an old pair of take out chopsticks.”

Showing his true rock-star side, Grohl had an EMT put on an impromptu cast and returned to the stage to finish the show. However, when he went for an X-ray after the show, “things got really real. I was told I needed surgery to fix the break,” he wrote. “So … here I am, recovering with 6 metal screws in my leg, thinking about a lifetime of holding up TSA lines from here to Kalamazoo … damn.”

“The doctors have told us to cancel shows. I’m really so sorry, guys. You know I hate to do it, but I’m afraid it’s just not physically possible for me at the moment,” the 46-year-old singer wrote.

“We’re doing our best right now to work out a plan, so bear with us. You know we’re good for our word. But for now, I need to make sure we have YEARS of gigs ahead of us.”