Halloween is still a couple weeks away, but Food Network is already decking its halls with holiday content. This year, the cable channel is serving up more seasonal programming than ever, growing its themed episodes by 40% compared to 2018’s slate, and it kicked things off at the end of last month with some spooktacular specials.

The reason behind the big push into making the season brighter with more Halloween, Thanksgiving, Hanukkah, Christmas and New Year’s Eve offerings is how much the shows lit up last year’s Nielsen data for Food Network, which scored its highest-rated fourth quarter since 2015 (+9% vs. prior year), largely driven by the holiday-programming lineup.

“Looking at last year’s ratings and what we had done in 2017, we definitely, in both years — and never before as aggressively as this year — have taken a big step up in the volume of content,” Food Network president Courtney White told TheWrap. “We’ve found that once we trigger Halloween, our viewers really wanna go from Halloween to Thanksgiving and into holidays and we’re really excited to introduce Hanukkah programming this year, too.”

Also Read: Why Alton Brown Was 'Waiting on Technology' to End 7-Year Break From 'Good Eats'

“What’s also exciting for us is last year we saw 30% of our audience in the fourth quarter was new to Food Network,” White added. “So this is a chance for us to really introduce the brand, the network to new viewers this season. So we’ll be paying close attention to that and as we get more eyeballs on the network we want them to become addictive fans, too. So we’ll be using that opportunity to really strengthen the network and as always we really have the viewers guide us on what they want and how they want that delivered and how we make that happen.” 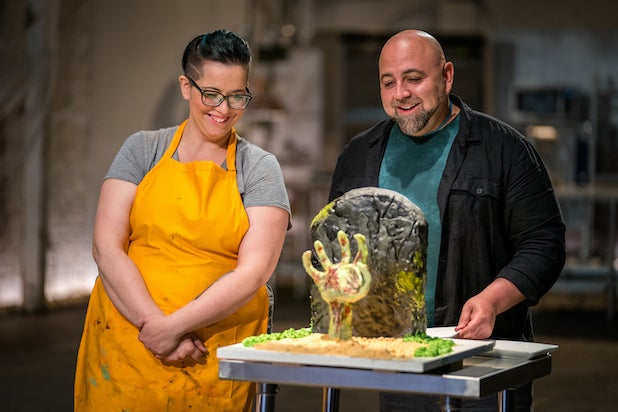 “And what we find is we’re able to really tap into the whole household coming together and watching,” the network boss said. “We have men, women, children watching, all generations. So it really is programming that speaks to all of the family and we find that gives us a real competitive advantage. And as we go into a season with the holidays, it’s something that every age, all genders, can watch together. So it’s just really broadly inviting, whether you’re coming for food, or you’re coming for the great characters that you follow through the arc of a competition or great holiday ideas about decorations and how to celebrate the holiday, or if you just get really excited about Halloween or Thanksgiving. We layer these shows with great entertainment and casting to watch, too. So it’s really fun for the whole family and all ages and I think the broadness of that appeal really pays off in so many eyeballs coming to the network.”

And then, there’s Hanukkah, which Food Network stars Molly Yeh and Alton Brown will help bring into primetime this year with “Ultimate Hanukkah Showdown” and a “Good Eats” latke special, respectively.

Also Read: Amazon's Alexa Will Teach You How to Cook as Part of New Food Network Streaming Service

“We have been featuring Hanukkah content for a while, episodically,” White said. “And we will do the same this year. Molly Yeh and her show ‘Girl Meets Farm’ will cover some Hanukkah recipes. We actually have a special of Alton Brown’s ‘Good Eats,’ which will cover Hanukkah. And for our primetime competition, Molly Yeh is hosting ‘Ultimate Hanukkah Showdown.’ So it was basically an extension of our holiday strategy where, years ago, holidays really lived episodically, in daytime and in a more utility point of view, which our audience still wants. And then, essentially, that really expanded into primetime competition. And so this year we’re looking so aggressively about increasing content, it was one of the first conversations that we had, because as we challenge ourselves, ‘OK, how can we do more at holiday time?’ seeing that Hanukkah was, we felt, underserved and a big opportunity, it was one of the first shows that we tackled. So that’s a really exciting foray for us. And within the whole breadth of how much holiday content we’re doing in primetime, it would seem like a miss to not dive into it.” 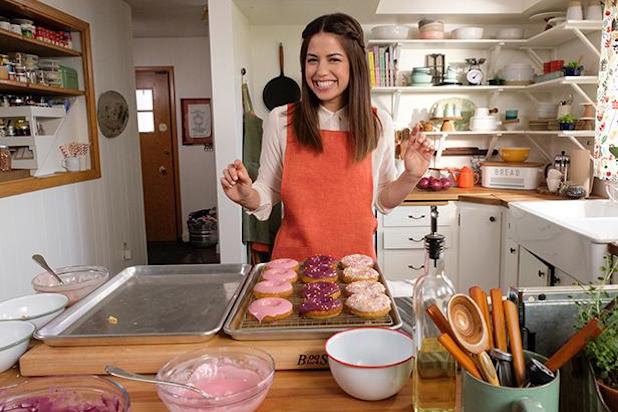 “Then it just happened to perfectly work out that Molly Yeh is such a strong emerging star in our portfolio and she herself is so passionate about Hanukkah,” White continued. “So it was really a perfect alignment of having the right talent with a real, authentic enthusiasm combined with the opportunity to grow the space that we haven’t really seen before in primetime in a big way. So between that and the ‘Good Eats’ episode, it will be fun to see where we can take Hanukkah and how we can grow that in years to come to as we talk about really honing the holiday to our audience, so we’re really excited about that.”

White said that the channel doesn’t see the big boost in holiday content as a road to “more, more, more, but a mix of more, and better, and feeding the audience and super-serving them in a way that they really tell us through the ratings and the feedback that we get on social, what they want from us in the holiday season.”

But Food Network is thinking beyond the holidays in its strategy to remain No. 1 in gastronomic content, as the Discovery-owned network prepares to launch its own subscription-streaming service, Food Network Kitchen, which will offer consumers “live, interactive cooking instruction every week with the top culinary experts in the world, grocery and equipment delivery, over 800 on-demand classes and so much more to make the consumer’s cooking, shopping and food experience more convenient, joyful and delicious.”

And while it works on its own app, Food Network is keeping an eye on what Netflix and Hulu are doing, as the streaming services continue to add to their food-related content. 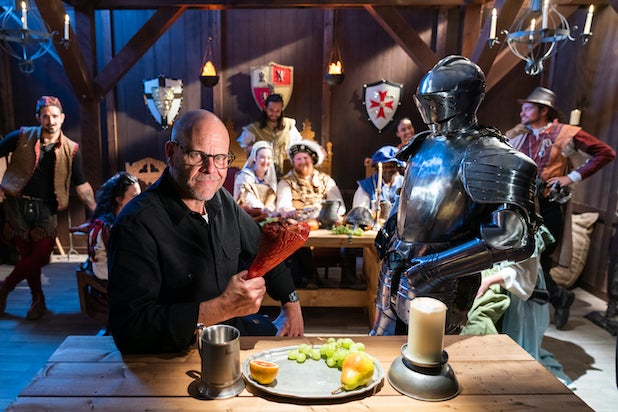 “We do definitely keep abreast of what our competitors are doing and we still feel like we are the home of food content and we are the leader in the category,” White said. “And while Netflix and Hulu definitely are ramping up more programming, what is unique about us not only is our family of talent, which is unparalleled but that their programs live within such a sea of content that is just a broader-based entertainment service.”

“For us, for our app, we’ve really gone in a different direction than our competitors who are really taking their linear entertainment and putting it on a platform, where our app is about really original, cooking how-to classes, with a real reliance on live content,” she added. “And it will really be a supplement to the shows. And as Food Network primetime has in recent years shift so much to entertainment, this really goes hand in hand with that, where you get the utility from your favorite stars and chefs that are beyond just the Food Network family, cooking recipes. So it’s really a utility play. So I think having the app that is so utility-focused and the linear service, which is so broadly entertainment-focused, within the world of food, there’s a dance there and I think both can live really healthily and drawback to one another. Because it’s not just our putting ‘Chopped’ on a streaming service, it’s new content that you won’t see on linear that still speaks to people who care about food, but in a much more utility way. So I think that’s a big differentiator between us and what the streamers are doing.”