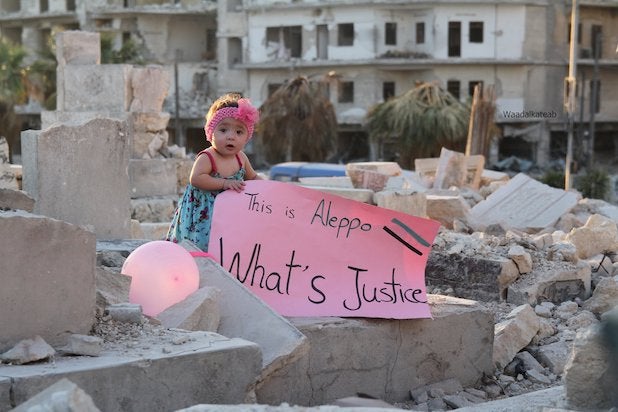 “For Sama” is a documentary about the bloody conflict in Syria, which has already been the subject of a string of notable nonfiction films, among them Feras Fayyad’s “Last Men in Aleppo,” Evgeny Afineevsky’s “Cries From Syria,” Matthew Heineman’s “City of Ghosts,” Talal Derki’s “The Return to Homs” and Sebastian Junger’s “Hell on Earth” in the feature realm, as well as the Oscar-nominated short docs “The White Helmets” (which won) and “Watani: My Homeland.”

What else, you could ask, is left to say about Syria, and about the devastating conflict that has found dictator Bashar al-Assad waging war against his own people with the help of the Russian military?

With “For Sama,” directors Waad al-Kateab and Edward Watts do find something new to say by taking a very simple, very personal approach. And the audience in the Soixantieme Theatre hardly cared that they weren’t the first to see the film, greeting it with a lengthy ovation as the credits rolled and then getting to their feet for an equally lengthy one when al-Kateab and Watts showed up for a post-screening Q&A.

And mostly, it is, as the title says, for one child in particular: Sama, the young daughter of al-Kateab and her husband Hamza, a doctor who ended up running the only one of the nine hospitals in East Aleppo that wasn’t bombed in Russian airstrikes.

The entire film is presented as a message to Sama from her mother, and an attempt to explain why al-Kateab and her husband stayed in Aleppo as the Assad regime targeted it as being a center of anti-government resistance.

The reasons for staying are sound, at least initially: They genuinely thought the anti-Assad uprising could topple his government and lead to a freer Syria. Later they felt duty-bound to help get out the word about what was happening (which al-Kateab did as a citizen journalist) and to tend to the many casualties (as Hamza did as a doctor).

But when every day puts a child in more harm’s way, it’s harder to convince yourself that you’re doing the right thing, and al-Kateab clearly struggles with that as she talks to Sama, sometimes as part of the copious home movies she took for years, sometimes in after-the-fact narration.

The footage, as personal as it is horrific, is often hard to watch: We see chaotic violence, dead and dying adults and children and grieving family members. And worst of all, in a way, are the casual words exchanged between parents and children, words that should never be part of daily conversation: “There’s lots of airstrikes today, right? But we haven’t been hit, yay!”

In a conflict that has put many, many wrenching images on screen, al-Kateab finds her personal take: “I keep filming,” she says at one point, “and it gives me a reason to be here.” But that reason could only last for so long: When the choice was between certain death and exile, the family left Syria and now lives in London.

Al-Kateab felt guilty about making that move, she said in the post-screening Q&A, though she refused to give up hope that images can’t have an effect. “We thought we would change the whole world,” she said. ” … I thought, ‘If people see this, things will change.’ And I still believe that people can change.”

When an audience member suggested that the film was one-sided because it didn’t present the way in which ISIS took over the anti-Assad rebellion, al-Kateab dismissed that as an untruth promulgated by the Assad government, which she and her husband said kept pushing that narrative for years after ISIS had left the region. Watts added, “If you say that the film is one-sided, I would say the side the film is on is the side of humanity.”

At the end of the Q&A, al-Kateab apologized for the images the Cannes audience had watched. “I know this was very hard for you to see,” she said. “But this is really happening, and still happening now.”

“For Sama” will air on Frontline after a theatrical run.