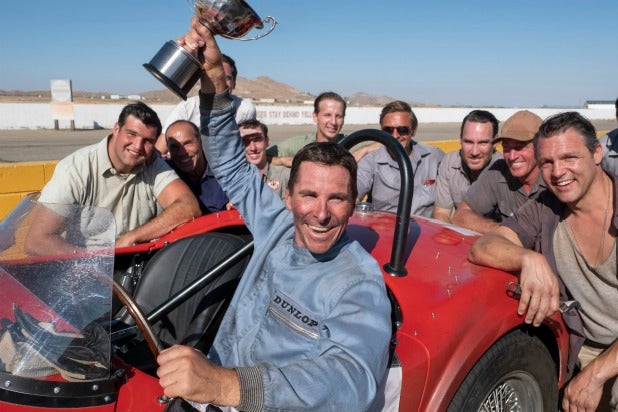 We’re off to the races at the box office again as “Ford v Ferrari” takes on Sony’s “Charlie’s Angels” reboot and Warner Bros. con man thriller “The Good Liar.” But none of the three are expected to speed far away from the pack, least of all after a November weekend in which the horror movie “Doctor Sleep” significantly under-performed.

Fox’s 2019 slate in particular is mired in a box office slump, with no film it has released this year rising above $100 million domestically. Disney is projecting just an opening in the mid-teens for “Ford v Ferrari” against a reported budget of $97 million, though independent trackers see it in the high 20s with a possibility to rise above $30 million.

“Ford v Ferrari” is the true story of how the Ford Motor Company hired Carroll Shelby (Damon) and driver Ken Miles (Bale) to build a car that could beat Ferrari at the 1966 24 Hours of Le Mans race. James Mangold directed the film that also stars Caitriona Balfe, Josh Lucas, Jon Bernthal and Noah Jupe. It is produced by Chernin Entertainment.

Stewart, Naomi Scott and Ella Balinska are the spy trio in Elizabeth Banks’s film that also stars Sam Claflin, Nat Faxon, Djimon Hounsou and Patrick Stewart. The studio is projecting that the film will open between $12-13 million, while independent projectors say it could sit within the high teens.

Sony’s had a few reboots of comedic action franchises this year, including “Men in Black: International” and “Zombieland 2: Double Tap.” “MIB” did $3.1 million in previews and opened to $30 million, and “Zombieland” did $2.9 million in previews and then made $26.8 million in its opening weekend. On the lower end, you might also look to Sony’s “The Girl In the Spider’s Web,” another female-fronted reboot released by Sony last November. It performed poorly with just a $7.8 million opening after earning only $635,000 in Thursday previews.

Finally, Warner Bros. “The Good Liar,” starring Helen Mirren and Ian McKellen, is projected for an opening between $5-9 million and has a 67% score on Rotten Tomatoes. Bill Condon directs the film about a con man who targets a wealthy widow, only for it to backfire and turn into a high stakes game of cat and mouse.