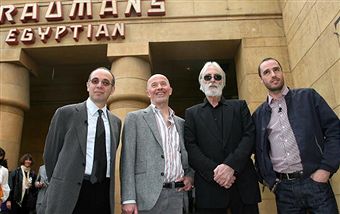 On a sunny Saturday afternoon, the day before the Golden Globes, four of the five nominated directors in the foreign-language film category shared stories and talked about their craft at the Egyptian Theater.

The sixth such gathering co-presented by the Hollywood Foreign Press Association and the American Cinematheque drew, from left, Giuseppe Tornatore ("Baaria"), Jacques Audiard ("A Prophet"), Michael Haneke ("The White Ribbon") and Sebastian Silva ("The Maid"). (Photo: Getty Images) The fifth nominee, Pedro Almodovar ("Broken Embraces"), was in Paris putting the finishing touches on the stage version of his film "All About My Mother" and was unable to attend.

Mike Goodrich, editor of Screen International and an HFPA member, was the moderator.

The panel was more a series of questions than an international discussion, in part because all of the directors except Silva spoke through translators.

Goodrich started things off by telling Haneke that while watching his film, set in northern Germany on the eve of World War I, "I kept thinking about how those children would become Nazis." Haneke responded that his film is not exclusively about German fascism, but rather is "an example of how people are prepared to take part in totalitarianism." Although he said it’s a film for German audiences, it’s not pointing a finger at Germany specifically and, he added, it would be foolish for non-Germans to think it doesn’t apply to them.

Asked about the role religion plays in the film, Haneke admitted that at 14 he wanted to be a clergyman, and people who don’t like his movies say they see that tendency in them.

Tornatore, asked if he’d intended to make a historical film, was adamant: "The first thing I wanted to avoid was making a historical film!" Instead, he said, "Baaria" is about how time transfigures its characters.

Politics also plays a role in the film, he said, explaining that in post-WWII Sicily, where it’s set, the villagers saw communism as an absolute solution to their problems and those of the world — "a savior," he said. "Politics was seen as a positive force for change."

However, the film "is not autobiographical," Tornatore declared. "It’s more than autobiographical! Many episodes in the film are born of fantasy woven together with those events that occurred," but the fantasies turned out more autobiographical than the real incidents, he said.

Audiard, whose film is about an Arabic youth in a French prison divided between Corsicans and Muslims, said one thing that drove him on the film was the severe underrepresentation of Arabs in French cinema. He said he found his lead actor, Tahar Rahim (who was in the audience Saturday), during a visit to a friend’s set. In the production car on the way home, he was joined by two young actors. "Something struck my eye about Tahar," he said, "and I knew one day I would end up working with him. But to confirm my first impression I had to meet with 30 to 40 actors."

Haneke could top that, however: To cast the children in his film, he auditioned about 7,000 kids over about six months. Not only was he looking for kids who could act, but also those who had the same look as the ones "we all know from the photos" of the era, he said. And to get farmers who looked realistic for the period, rather than today’s German farmers "who ride around in air-conditioned tractors," he said they went to Romania and cast there.

That photographic look also played a part in the choice to shoot "White Ribbon in black-and-white, Haneke said. "I thought, since we know that era through photos, it makes it easier for the audience to identify with the story, project themselves into it," he explained. "Also, I like the element of alienation, of distancing." It’s the same with the narrator, he added, creating a distancing effect.

Silva got the audience laughing by saying, "Even some maids have maids in Chile!" His film, "The Maid," is about what he dubbed "almost an endangered species," the live-in maid, something he grew up with, "but it’s not a historical film yet," he quipped. However, he said, it’s really about "the emotional ambiguities between employee and employer."

Silva said he wrote the role of the maid Raquel for Catalina Saavedra, who starred in his first film, "Life Kills Me." "I was really stunned by her talent," he said of his leading lady, also in the Egyptian audience. "The most talented actors are comedy actors –if they can make you laugh, they can make you cry, but not the other way around," he said.

However, when he called to tell her he’d written a film for her, and told her the role was a maid, she was less than thrilled, Silva admitted. "She said, ‘F— you!’ I didn’t know she’d played like seven maids!"

Writing a role with a specific actor doesn’t always work out, however. "The White Ribbon" began life two decades ago as a television series, Haneke said, and he had to condense it for the film. At the time, he had Ulrich Muhe ("The Lives of Others") in mind for the role of the priest. However, the actor died before the film could be made.

Goodrich asked Tornatore about his long-running collaboration with the legendary composer Ennio Morricone; they have done 10 films together. Unusually, Morricone writes the score based on Tornatore’s first-draft script, before a frame is shot, the director said. "I always think about this process," Tornatore said. "The traditional method never convinced me, although it has produced some great results."

Once he has the script, Tornatore said, he and Morricone "start talking about the elements of the story that can inspire the music, the subtext of the film — that is the closest thing to the role music fills in film. He has me listen to things — we talk, we modify, we tear them up, we start over. But when I start shooting, I have all the music."

Goodrich asked whether a film’s ending needs to be conclusive — an ironic question for Haneke, who is known for the ambiguity in his movies. Indeed, Haneke used an Olympics metaphor: "I build the ski jump, but it’s up to the audience to take that jump," he said. In his "Cache," he said he wrote the dialogue for the closing scene, which involves two boys in a schoolyard. "I knew whodunnit, but I made them swear not to say, and I burned the script!" he said.

"Anyone who pretends to offer solutions to the fundamental questions is either a liar or a cynic," Haneke said. "We shouldn’t expect literature, painting, sculpture, cinema to offer the answers. They should just propose the questions to consider."

Audiard agreed, to a degree. "Secondary characters don’t always need a conclusion," he said. "But when you’re writing, when you open a closet, you always have the temptation to close it." 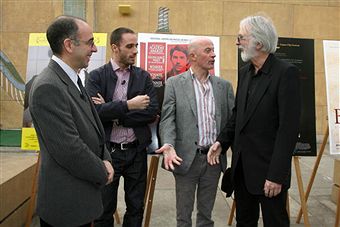 And Silva’s take was that "it’s not necessary to share your interpretation of the conclusion, but you want to finish telling the story."

Asked about their influences, Haneke and Audiard demurred, but Silva proclaimed, "My biggest influence was Walt Disney." Specifically, he said, like Disney’s, "My films will continue to have a mix of genres. Walt said, for every laugh in your film, there must be a tear — that’s what I want.

"Life doesn’t have a genre," Silva declared, "nor do my films or Walt Disney’s."

And, in a discussion appropriate to the category and the Globes, Audiard lamented the decline of Italian cinema, only to have Tornatore eloquently disagree.

"Italians have been fabulous in spreading the word that our cinema is always in decline," Tornatore said. "If we were as good at promoting our films as we are at promoting the legend of the decline and fall of our industry, we’d be a huge success. In spite of our difficulties, the creativity of our filmmakers has never been matched," he declared.

However, Haneke pointed out that it’s impossible to finance a film using only one country’s resources, so now "we have the advantage" of drawing on several together. "We make our films for the entire world," he said, "so it seems relatively unimportant to hold the flag for a single country."

An admirable sentiment for a day and an organization celebrating the international language of cinema.