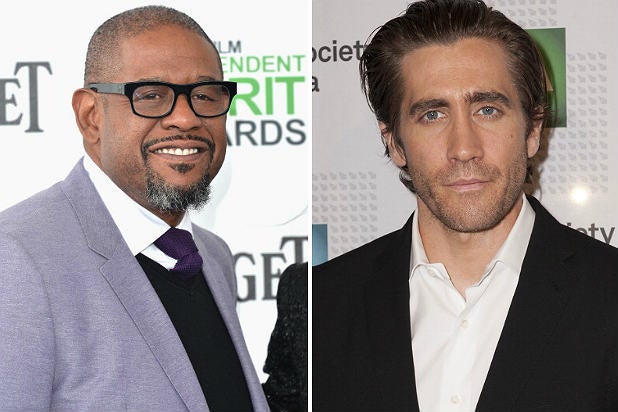 A representative for The Weinstein Company did not immediately respond to a request for comment.

Gyllenhaal is set to play Billy “The Great” Hope, a left-handed prizefighter who wins a title but suffers a tragedy soon after and must put his life back together to earn the respect of his young daughter.

Whitaker is making a deal to play the other lead of Titus ‘Tick’ Willis, a former fighter who was forced to retire after losing an eye and now trains amateur fighters.

While the film is set against the backdrop of the boxing ring, Fuqua has previously said that “the heart of the movie is about a man learning to be a father.”

Alan Riche and Peter Riche are producing through their Riche Productions banner along with Fuqua and Escape Artists’ Todd Black, Jason Blumenthal and Steve Tisch. The two companies are hot right now, with Escape Artists coming off strong test scores for Fuqua’s “The Equalizer” and Riche Productions prepping a big-budget “Tarzan” movie for Warner Bros.

A fighter of a film that once had Eminem attached to star, “Southpaw” was originally bought by DreamWorks as a pitch from “Sons of Anarchy” creator Kurt Sutter, who also wrote the script. When DreamWorks tapped out, MGM swooped in planning to distribute through Sony, though the film was eventually put into turnaround, which is where the Weinstein Company rescued it.

Production is now scheduled to start this summer.

Whitaker, who won an Oscar for “The Last King of Scotland,” recently starred in TWC’s “The Butler” and produced its drama “Fruitvale Station.” Coming off “Out of the Furnace,” Whitaker is currently filming “Taken 3.” He’s repped by WME, Brillstein Entertainment Partners and Ziffren, Brittenham.