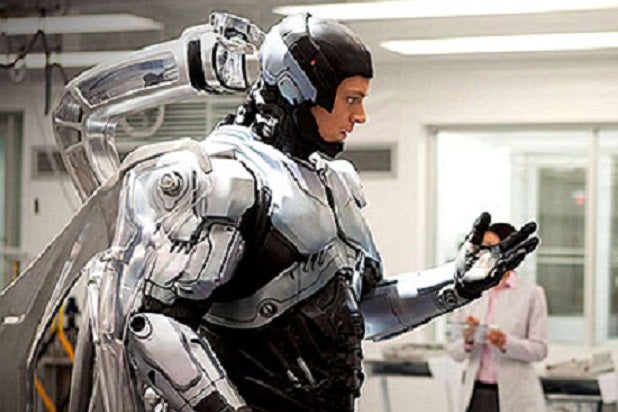 “Robocop,” the action alternative at the Valentine’s Day weekend box office, looks ready to flex some mechanical muscle at the multiplexes starting Wednesday — and should take in north of $40 million over the six days, which includes Monday’s Presidents Day holiday, analysts say.

A co-production of MGM and Columbia Pictures, the 3D remake of the 1987 sci-fi film is tracking well, the social media is solid and it’s off to a good start overseas ahead of its nationwide opening. But the José Padilha-directed reboot, which stars Gary Oldman, Abbie Cornish and Joel Kinnaman as “Robocop,” will be facing some stiff competition, some of it from its own distributor, Sony.

With George Clooney‘s “The Monuments Men” back for its second week and the “About Last Night” remake starring Kevin Hart opening Friday, Sony will have three movies in the marketplace this weekend. That’s in addition to Universal’s new take on “Endless Love” and Warner Bros.’ romantic fantasy “Winter’s Tale,” both of which open on Valentine’s Day Friday, and the reigning No. 1 film, animated powerhouse “The Lego Movie.”

All those options – and the Oscar-nominated movies are out there, too – are great for moviegoers, but the crowding means there could be some box-office casualties. All three of Sony’s entries look solid, however.

The demographic targets are different enough for the mature-skewing “Monuments Men,” the date-night comedy “About Last Night” and “Robocop” to all succeed, according to BoxOffice.com vice-president and senior analyst Phil Contrino.

“There’s really not a lot of overlap and I think they can all find their footing,” he said. “It is a big date-night weekend, but ‘Robocop’ should get the single guys.”

The PG-13-rated “Robocop,” counter-programming to the romantic fare, is expected to finish second behind “The Lego Movie” over the long Presidents Day weekend. It’s getting the jump on its rivals with the Wednesday debut and will be in roughly 3,366 locations, including 330 Imax theaters.

It’s a reboot of director Paul Verhoeven’s original, which saw Peter Weller in the titular role alongside Nancy Allen, and tells the story of a fatally injured policeman who returns to the force after undergoing surgery that grafts machine parts into his anatomy and battles the evil OminiCorp in the year 2028.

It’s been a long time coming to the big screen for “Robocop,” which was pushed from last August to this date. Darren Aronofsky was attached to direct a version that was to have hit theaters in 2011, but that one stalled amid MGM’s financial troubles. The project was resuscitated in 3D and with Brazil’s Padhila (“Elite Squad”) as director and Joshua Zetumer (“Quantum of Solace”) writing the screenplay, with Edward Neumeier and Michael Miner. The producers are Marc Abraham and Eric Newman.

Sony is handling the marketing on “Robocop.” As with most remakes, the key will be drawing fans of the original while still making it seem fresh enough to lure younger moviegoers unfamiliar with the first film.

The reviews are so-so (54 percent on Rotten Tomatoes), but that’s OK for an action movie and social media is strong. It’s running well ahead of “Total Recall” on both Twitter and Facebook, and that remake of an ’80s action hit opened to $25 million in 2012.

“Robocop,” which has a production budget of just under $100 million, is likely to make most of its money abroad, where neither the original film nor its two sequels played and 3D can have a significant impact. Sony and MGM both have some foreign markets on “Robocop,” which has taken in nearly $29 million internationally  in two weeks. It will opening in some key territories this week, including Russia, Mexico and Spain.

Sony will get even busier at the box office next weekend, when it rolls out Paul W. S. Anderson’s 3D volcano action epic “Pompeii.”