So Malcolm McLaren is dead.

The self-proclaimed maestro provocateur of punk, and everything else important that followed, died of cancer in a Swiss hospital Thursday at the age of 64.

McLaren's dead, but I'll bet there are some who will stand guard over his eventual burial spot in London's Highgate Cemetery to make sure the former Sex Pistols manager doesn't claw his way out and walk among us again. We all try to speak well of the dead, and most tributes are proclaiming his genius and gifts, but the truth is that everybody hated Malcolm McLaren at one point or another. 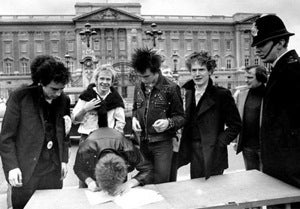 If the lawsuits and biographies are any indication, everyone who dealt with McLaren — from the New York Dolls, whom he dressed up in Communist red leather in their last days, to Johnny Rotten, whom McLaren managed and manipulated in the Sex Pistols, to his former business partner and lover Vivienne Westwood — felt cheated, scammed, stolen from, patronized or just plain aggravated with a man who claimed credit for everything and never ever seemed to be wrong.

More fatally, McLaren, alive or dead, can never avoid having some of the blood on his negligent hands for both the heroin overdose of the Pistols' Sid Vicious and the killing of the bassist’s girlfriend Nancy Spungen.

The thing is — important to remember in an age where sex scandals make bland Tiger Woods and Sandra Bullock infinitely more interesting and “American Idol’s” Simon Cowell is perceived as pugilistic — Malcolm McLaren never hid his horrible side.

Perhaps that is why, in a sense, the best things about him were fake.

Maybe the art school-educated McLaren was utilizing the poignancy of the French Situationists, as Greil Marcus claims in "Lipstick Traces," and the student uprisings of 1968 with the naughty T-shirts and bondage gear at his King's Road SEX boutique and the Pistols. Maybe, with designer Westwood, McLaren was melding fashion and music into something sexier, more violent and more accessible than ever before — you certainly see traces of that in Agent Provocateur, the lingerie brand founded by McLaren's son Joseph Corre.

Maybe, and perhaps most fittingly, it was all sheer spectacle with surgical stabs to the culture.

In a way, the conjecture doesn't matter. It doesn't matter because in this life, as Robert Oppenheimer, Col. Tom Parker and, to a far lesser extent, Sam Worthington learned, you only have to be in the right place at the right time with the right moves once to make your mark.

Like now, the Western economy was in the toilet in the mid-1970s when the rabid Sex Pistols dropped their bombs. Unlike today’s biggest acts, the band, who have reunited several times since their 1978 break-up, wasn't about selling you a beverage and a banner ad. The Pistols with McLaren barely in the background were shilling art and anarchy.

Why? Because, as McLaren repeatedly said, "Being bad is more exciting."

Tapping into something truly fierce, McLaren and the band were very good at being truly bad. Prime ministers, presidents, the media and monarchs feared McLaren and the Sex Pistols. They banned their music even though "God Save the Queen" was the best-selling single in the U.K. The establishment, which still existed in the late '70s, had the police harass the band and their manager.

Pistols tours were closed down and record companies were pressured to drop them — though the Pistols snuck out to U.K. venues as SPOT (Sex Pistols on Tour) and just took one label’s money and signed with another.

Today, the biggest act of rock 'n' roll rebellion is Slash sporting a pro-Conan O'Brien pin on Jay Leno — a bit of a tweak to NBC, but not exactly a threat to the fate of the Republic.

McLaren, even in his later work with Steven Spielberg, Quentin Tarantino and British Airways, was always trying to threaten something. Even with his post-Pistols efforts into the then-unmapped territories of new wave, hip-hop, world music and bringing opera to the masses, McLaren had more sneer than smile. Hell, in one of the great cultural ironies, no wonder, Eminem sampled a McLaren tune for his 2002 hit “Without Me” — the Detroit rapper is an heir to the British artist, whether he knows it or not.

Still, as varied as his career was, I've always thought that McLaren's most brilliant turn in a life that really was performance art in motion was to take the Sex Pistols right off the beaten path. On their first tour of America in 1978, any other manager would have brought the infamous Pistols to New York, where the band and punk had a huge following and likely would have sold out Madison Square Garden, L.A. and other big media markets.

Not Malcolm McLaren. Instead of turning the Sex Pistols into just another rock band, McLaren booked the band in cowboy bars in towns like Atlanta, Tulsa, Baton Rouge and Memphis before it all imploded in San Francisco. Nobody has the guts or the wit to do that today.

Refreshingly, Malcolm McLaren, unlike Bill Clinton, Richard Nixon, Colin Powell, Jesse James and Tiger Woods, never said he was sorry. To the end, he was hyperbolic, outrageous and cutting, dismissing Westwood, the Pistols, The Clash, Kate Moss and anyone else caught in his sights.

"For me, Malc was always entertaining, and I hope you will remember that,” John Lydon, the former Johnny Rotten, graciously said in a statement released after news of McLaren’s death was announced. “Above all else he was an entertainer, and I will miss him, and so should you."

Of course we will.