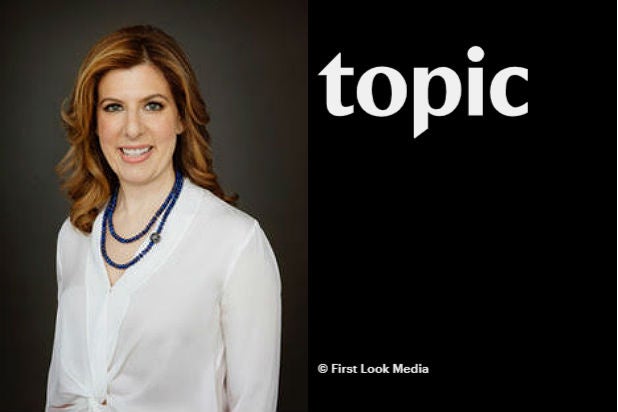 Zuckerman will head up Topic Studios’ overall strategy, including development, financing and production on feature films, documentaries, TV, podcasts and digital programming. Although she’ll be be based at Topic Studios’ New York City headquarters, she will also be working extensively out of the company’s new L.A. office and will report to Michael Bloom, the CEO of Topic Studios and its parent company First Look Media.

Zuckerman spent nearly 20 years at HBO, where she oversaw production of more than 30 titles which earned a combined 92 Emmy nominations and 17 wins, including three Best Movie/Miniseries. Projects under her supervision also received 22 Golden Globe nominations, 23 BAFTA nominations and numerous other awards. In 2010, she received the Risk Taker Award from the Women’s Expressive Theatre.

“Maria is a super smart, creative executive who filmmakers and talent love to work with,” Bloom said in a statement. “Combined with her extensive experience at HBO and her impressive background working with established and new voices, we knew she had the right sensibility for us.”

“In 3 years, Topic has firmly established itself as a unique studio, driven by a passionate spirit and innovative approach to storytelling,” Zuckerman said. “I’m thrilled to join at such an exciting time at the company and for the opportunity to further build out their compelling slate across film, television, podcasts and digital.”

Among Topic Studio’s upcoming projects are: the documentary “XY Chelsea,” about Chelsea Manning, which premieres June 7 on Showtime; the drama series “Atomic Bazaar”; an adaptation of the Herman Melville novella “Benito Cereno”; the drama “Hunger,” about the global food industry; and “Gold Fame Citrus,” set amidst a massive drought that has turned residents of the Southwest US into refugees.es.